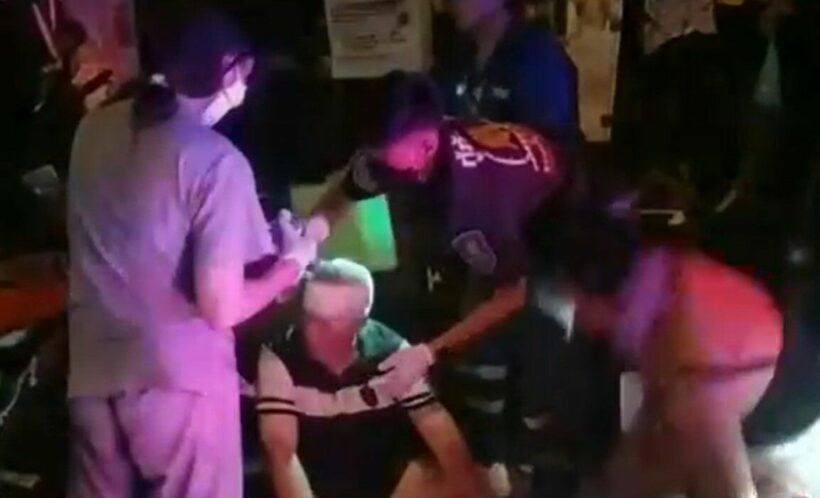 Security guards at a nightlife complex in central Pattaya are accused of attacking a foreign tourist in a dispute over a bill. The Pattaya News reports that the incident took place around 11.30pm last night at the Tree Town complex, with a 58-year-old man, reportedly Irish, injured in the brawl. For their part, the guards claim the tourist refused to pay his bill and tried to flee. When they stopped him, they say he tried to fight them, then accidentally fell over.

According to a rescue worker at the scene, the unnamed man sustained a heavily bleeding head wound and was reportedly confused. He was given emergency treatment at the scene, before being transferred to a local hospital.

According to the Pattaya News, 2 Australian tourists who witnessed the incident, told police the man had been chased by a number of Tree Town security guards, who then got into an altercation with him. They report seeing the man fall and hit his head, but they could not say who started the physical altercation.

When questioned by police, 2 security guards stated that the man had refused to pay his bill and tried to flee the venue. They say they tried to stop him, then chased him and blocked his path, at which point he became aggressive and shoved them. They claim they responded in self-defence and as they were trying to calm him down, the man fell and hit his head.

Police have admitted they are skeptical of the guards’ story and will review security footage of the area. They also plan to speak to the Irish tourist once he has recovered, at which point, they will decide if charges need to be brought.

King Cotton
2 hours ago, Bluesofa said: Quick, duck. Toucan play that game. Bejesus! . . . that must get 'Joke of the Day' award 😂
Saunk
Seems like there is always some drama at Tree Town.

PapayaBokBok
4 hours ago, Dedinbed said: Duck , toucan , platapus .? No..a ladyboy named Bill........friends call her Billie Jean
Vigo
7 hours ago, Fanta said: Assault is assault especially when you are paid to keep the peace. My experience has been that the primary duty of "security" staff at Thailand "entertainment" establishments is to protect the property and business income…
HiuMak
Cheap tourists always a problem