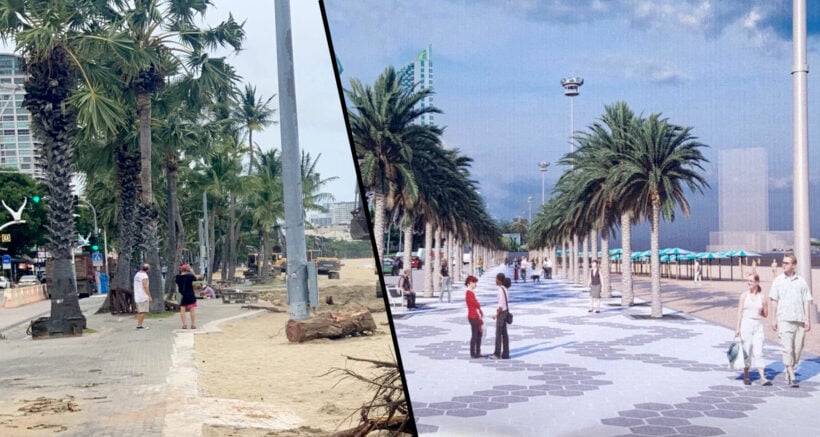 FILE PHOTO: The Pattaya beach remodel project before and after.

After an uproar paused a beach remodel project that began Sunday, the Pattaya City Mayor held a press conference to explain and justify the remodel plans. Community leaders and notable residents protested the plans to launch the refurbishment, with complaints mainly on two grounds. First, many objected to the removal of trees that would come along with revamping the beachfront. And second, many felt the outpouring of money into an upgrade while so many were struggling and suffering from the economic effects of Covid-19 was a slap in the face to locals.

Pattaya City Mayor Sonthaya Khunploem addressed the local press to explain that the project is part of a long-term multi-phase project already in progress before Covid-19 and not taking funds away from Covid-19 assistance or relief. The project started with expanding the sand area of the beach and is connected to water drainage improvements recently completed in April.

The mayor attempted to counter the sentiment that this was a new project wasting money during a pandemic. Private investors and the Eastern Economic Corridor were financing the project that has been budgeted and planned for many years already. Sonthaya explained that even if the project was shut down, no money could be funnelled to Covid-19 efforts in Pattaya.

“The money being utilized for this plan could not be redirected to Covid-19 efforts even if we wanted to due to the fact that the project is an EEC initiative and was funded and raised well before the virus with EEC investors specifically raising funds for this purpose.”

Addressing the other primary concern about the project, the mayor said they were careful and considerate about the trees that would and wouldn’t be removed for the project. They designed the project to preserve at least 75% of the trees along the Pattaya beach and to avoid creating maintenance issues for the trees. The plan removes only larger, fast-growing trees that many vendors planted to provide shade to their stalls, citing safety and pest concerns.

“These larger trees have a tendency to have branches break, especially during heavy storms and we have had several incidents of people injured. The larger trees also tend to attract insects, birds, rodents, and other types of wildlife that both vendors and tourists dislike.”

The Pattaya Mayor defended the remodel plan, which even supporters admit bring some much-needed improvements to the beach area like bathrooms, parking, handicap access, and exercise and playground areas. He also made a point to bring attention to the various Covid-19 measures the government has launched, including private vaccine purchases, and assistance for those affected by the virus.

yselmike
The protest is (hopefully) aimed mainly at the needless destruction of the trees.It looks like the only trees that are left according to the promo pic are the ones that are planted on the walkway/promenade.
Stonker
16 hours ago, gummy said: Millions upon millions of baht every two years , 30% of which follows Thai tradition and is syphoned off into the pockets of the corrupt officials. "30%"? In Pattaya? Come on, perleeze .....
Cathat
And having lived in Miami and singapore I'm absolutely delighted it will never be like either of those places. I don't think anybody here(self included) would like all the rules and regulations you have to abide by or the cost…

Rain
6 hours ago, Stonker said: "30%"? In Pattaya? Come on, perleeze ..... Indeed. Perhaps Gummy was jesting diplomatically.
Stonker
1 hour ago, Rain said: Indeed. Perhaps Gummy was jesting diplomatically. I recall land for a waste dump bought by his father then sold on to Pattaya a week later, allegedly netting him a profit of 100,000% in a week…