One of two paramilitary soldiers wounded during series of attacks in Narathiwat’s Sisakhon district yesterday (Tuesday) has succumbed to his injuries at Naradhiwat Rajanagarindra Hospital.

The deceased, 35 year old Kamjorn Tanma, a native of Chiang Mai province, was scheduled to wed his girlfriend tomorrow. A bathing ceremony for Kamjorn was held at Bangnara Temple in Narathiwat’s Muang district, presided over by the Fourth Corps Commander Lt-General Kuekoon Innachak.

Kamjon and another paramilitary soldier, Wissanau Chamnanna, were riding with two regular Army soldiers in a pickup to buy supplies at a market in Sisakhon district when a group of heavily-armed militants opened fire on them from the roadside, injuring all four.

The three other injured soldiers are still receiving treatment in hospital. 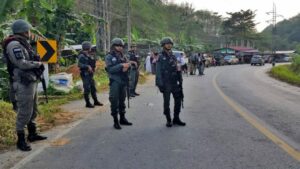 The funeral was attended by senior Narathiwat officials while Prime Minister Prayut Chan-o-cha, his deputy Prawit Wongsuwan and other senior officials sent wreaths to the event.

Kamjon’s family is entitled to receive compensation of 500,000 baht from the Compensation Centre in Narathiwat and a further 2,230,723 baht from paramilitary authorities. Total compensation for his family will be about 3 million baht.

After the bathing ceremony, his body was transported to his native province of Chiang Mai in a military aircraft and he will receive royal cremation on Saturday.

Meanwhile, paramilitary commander Colonel Charoon Jaturong said four suspects, including two women, had been summoned for interrogation on suspicion that they had been involved in yesterday’s attack. 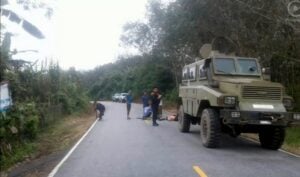 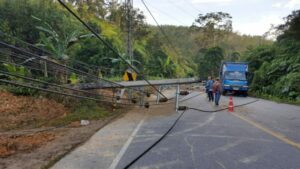