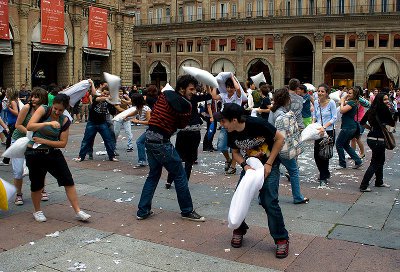 PHUKET: New Year is always a time of reflection. To cast out the old and usher in the new. This week’s Weird World News features a trio of time-related happenings from around the world.

THE South Pacific island nation of Samoa has scrapped its time-zone alliance with the United States and jumped 24 hours into the future.

This means Friday, December 30, will not exist this year for Samoans; it has been struck from the calender, deleted from history, gone, gone … never happened.

By moving a full day ahead in time, Samoa will now share a time-zone alliance with Asia, New Zealand and Australia.

On New Year’s Eve, Samoa will have side-stepped the international longitude dateline, which runs through the Pacific, in a move that the country’s Prime Minter reportedly said would have trade benefits for Samoa.

“It will remove the enormous amount of confusion in our travel times for the Samoans and especially for the tourists who come to Samoa, who keep thinking of the New Zealand and Australian time zones,” he told Reuters.

Church bells will ring and carol services will be held to signal the changeover.

Samoa, with a population of 180,000 people, formerly used the same time zone as New Zealand and Australia, but skipped back a day in time in 1892, siding with the US time-zone alliance.

Resolutions 2012: Time to return that overdue book … after 123 years

The book, by Donald Macleod, was discovered by the side of a fireplace at mansion in the Lake District Village of Troutbeck.

It was borrowed from the local library by owner of Townend House, George Browne and his family.

The house is now owned by the National Trust and is where the book was discovered, sitting alongside the Browne family’s extensive 1,500 book collection.

But Good Words was not the Browne’s property and should have instead had its place in the local library.

Staff at the library said the book could stay with the National Trust, although it was a “bit naughty” of the late Mr Browne not to have returned the book.

The Mirror reported that a 10,152 baht fine was due on two books borrowed by US first president George Washington from a New York library in 1789 and found 210 years later.

Chinese use pillow fights to relax

IF YOUR boss is getting on your nerves, then why not try writing their name on a pillow and then hitting it repeatedly. That’s what Shanghai locals are doing.

A massive pillow battle was staged earlier this week, with the sole purpose of letting participants unwind by pummeling strangers and friends with pillows.

The fifth-annual event received a huge turnout from stressed-out office workers this year, intent on spending two nights getting to grips with some raw emotion and fighting, with soft pillows.

Founder of the event, Eleven Wang, told Reuters news agency: “Nowadays there are many white collar workers and students that are facing huge pressures at work and at school, so we hope to give them an outlet to release their stress before the end of the year.

“After releasing the stress, we can once again face our daily life with joy.”

New Year goes off with a final bang