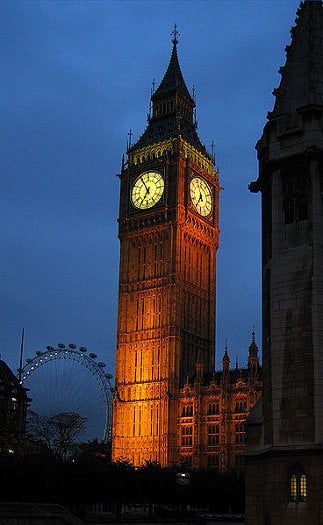 DESPITE London’s iconic Big Ben clock tower’s unexplained tilt, an MP committee has ruled that no renovation work will happen before 2020.

Surveyors recently discovered that the 96-meter clock tower at the Palace of Westminster leans 46cm to the left of its peak.

But surveyors aren’t too worried, as they guess it would take 10,000 years for Big Ben to reach an angle of concern.

Repairs and restoration work could cost as much as 4.9 million baht.

Some reports suggest work on underground tube tunnels in the 1990s could have caused the problems, while others point to the tilt being present since it was built in 1859.

Reports also surfaced this week that the parliament buildings are in danger of slipping into the Thames River after cracks were found in the superstructure, but these reports have been played down by experts.

The MP committee stressed that the Palace was “structurally sound”, BBC reported.

This is not the first time Big Ben has had problems.

In 1976 pendulum weights fell down a shaft and the clock mechanism exploded, putting the big one out of action for nearly nine months.

AN UMEMPLOYED Irish artist has found an interesting way to pump government money into his new home: building it with shredded notes.

Frank Buckley’s new apartment, in the lobby of an abandoned Dublin office building, is made from the remains of 1.4 billion euro of shredded notes he borrowed from the Irish national mint.

Buckley’s creation is a monument to the “madness” he says has been unleashed on Ireland by the adoption of the single currency, Reuters reported.

He said he wanted “to create something from nothing” in an act of artistic retaliation to the property price crash of 2007 and the embarrassment of International Monetary Fund and EU bail-outs in Ireland.

The site of his new home is one of many unoccupied office buildings in the city.

Buckley moved into to his “billion-euro-office-apartment” in December, and has been busy renovating since, adding a hall, living room and kitchen.

The walls and floor are lined with euro shreddings, which are remarkably good for insulation. Buckley doesn’t even sleep with a blanket.

He said if the euro currency ultimately fails, he would be more than happy to use the defunct notes for future projects.

AN ENVIRONMENTALIST was disappointed this week to find a company fitted his home with new solar panels – facing away from the sun.

Tenant Gerald Evans pointed it out to the fitters but claims he was ignored, The Mirror reported.

The retired laborer was told by the company that workers had assessed the position using a compass.

But they either had a faulty compass or it didn’t work, as they fitted the panels at the back of Evans’s home, where no sunlight reaches.

The company later apologized for the error, and agreed to fix re-install the panels free-of-charge. Bright idea.