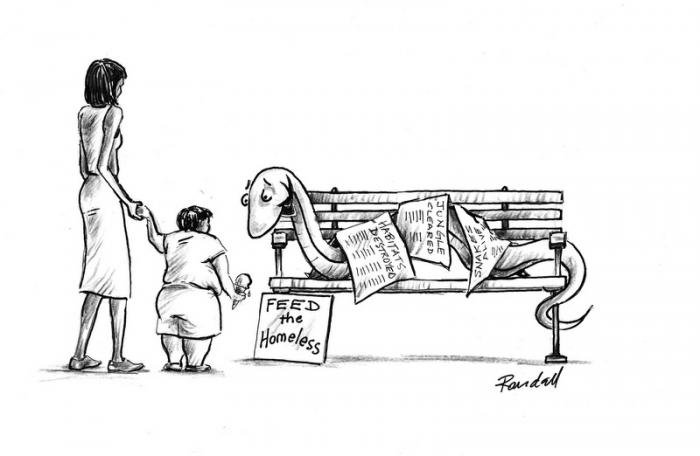 PHUKET: Reports that a record number of large snakes were captured by emergency rescue workers in Phuket last month are just the latest indicator of how badly the remaining natural habitats on the island are being destroyed by the relentless ‘development’ that Phuket has undergone in recent decades.

Snakes do not rate highly in our anthropomorphic view, which tends to favor animals more likely to be perceived as ‘cute’.

Think puppy dogs, kitty cats, pandas, teddy bears – all the usual suspects. You probably already have a warm, fuzzy feeling coming over you. You might even have a sudden urge to check your Facebook feed. It is nothing to be ashamed of – we’re all basically wired the same way.

Now think ‘snake’ and you can just as quickly feel that delightful fuzziness evaporate into feelings of fear, disgust and apprehension.

We even have a name for it: ophidiophobia, the ‘abnormal’ fear of snakes. In fact, ophidiophobia is just a sub-brand of an even wider phobia known as herpetophobia, which is not the fear of Soi Bangla-induced cold sores, but rather the fear of reptiles and amphibians in general.

The human fascination with snakes is certainly alive and well here in Phuket. When the Phuket Gazette was first able to gauge reader interest based on the number of ‘clicks’ more than a decade ago, we were astonished at just how popular any story involving snakes would instantly become.

Yet, in all this time, we cannot remember a single incident in which a human life has been lost as a result of a snake bite. This is quite remarkable when one considers how many cobras there are on the island and how relentlessly we have been driving them out of their natural habitats.

One of the most popular Facebook stories on the island in recent weeks has been a local effort by one NGO to stop Koreans from eating ‘man’s best friend’.

While mental images of Rover being served up at the Korean BBQ are certainly compelling, maybe it is time we also step back and consider sending a little love to some of the other species that have called our island home for eons and still play crucial roles in maintaining balance in what remains of our vanishing natural ecosystems.