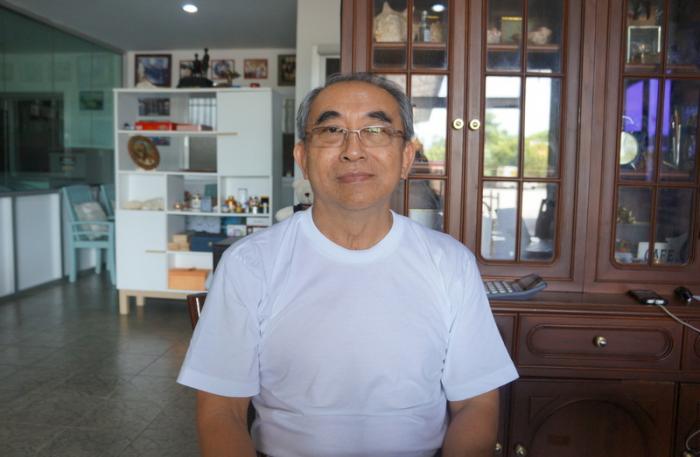 PHUKET: Prasert Fakthongphol, 68, is the founder and president of the Phuket Shrines Association. He was born and raised in Phuket and has a vocational certificate in business studies from Dusit Commercial College in Bangkok. He has been the president of the association since 2001 and also owns a transportation company.

Here, he talks about the real purpose and tradition behind the controversial Phuket Vegetarian Festival.

The vegetarian ‘festival’ is not really a festival at all, but rather meant to be a tradition. The main purpose behind it is taking a break from killing and bringing trouble to others’ lives. Above all, it helps you keep yourself out of trouble.

This is specifically a Phuket tradition, not a common Thai tradition. We have been carrying on this tradition for thousands of years. It does not differentiate between people, so it does not matter who you are or where you are from. Anyone who would like to join is welcome to participate.

In Phuket, we call it ‘Jia Chai’ but it’s not wrong to use the word ‘Jeh’ either. The important thing is to avoid eating animal flesh. Some people participate so they can have delicious food, while others hold cooking competitions, but that is not the real purpose of this tradition.

It started in Phuket more than 200 years ago. China discontinued it when they moved toward communism. They prohibited the use of candles and incense because it was considered a ‘wasteful’ practice. So that’s how the tradition disappeared from China.

Jia Chai principles are described in detail, but nobody is forced to do anything. It depends solely on the individual and how strictly he or she wants to observe it. If you choose to forego animal flesh, then you may. However, if you are willing to do more, it will help you.

The principles dictate that you must stay calm at all times. This entails not speaking unnecessarily while the nine-day tradition is being observed. You must also keep your body clean and your mind at peace.

To have your mind at peace, you must take a break from the physical aspects of life – taste, smell and sound. This is why you must only consume boiled vegetables, as the purpose of the tradition is not to have delicious food.

You can pray no matter what language you speak. It does not matter what religion you practice, as this tradition transcends religion.

We do not receive any support from the government and work purely on the basis of donations. The Office of the Auditor General (OAG) keeps an eye on local governments to make sure they do not give money to shrines.

The government does not support this tradition because it is not considered a part of Thai culture. However, we are Thai and we do practice it. I was born here and I love Thailand. Our ancestors are from China, but that does not mean we belong there. This is the culture of our ancestors that we are carrying on.

The Tourism Authority of Thailand promotes us, but does not provide us with any other support. We have been practicing this tradition for 200 years. It is not a festival that you may stop anytime you want. It is a Phuket tradition, yet the government is not supporting us.

Local governments are trying to help us but their hands are tied, as they have to follow the policies laid out by the central government.

We are only allowed to use the weapons described in legend, as each God has their own weapons. If anyone uses modern weapons, we would prefer not to have them join the parade. We don’t want guns and advertising signs. We understand that teenagers want to show off, but we try our best to keep an eye on such activities.

We cannot control anybody’s behavior, but people who really want to practice during these nine days will always find a way to do it right. There are hundreds of vendors participating and we cannot keep an eye on all of them. They are allowed to sell whatever they please, but I can only hope that they sell the right food so people who come to Phuket can learn what the vegetarian festival is really about.

Ministry of Farang Affairs: Showing off your work ID