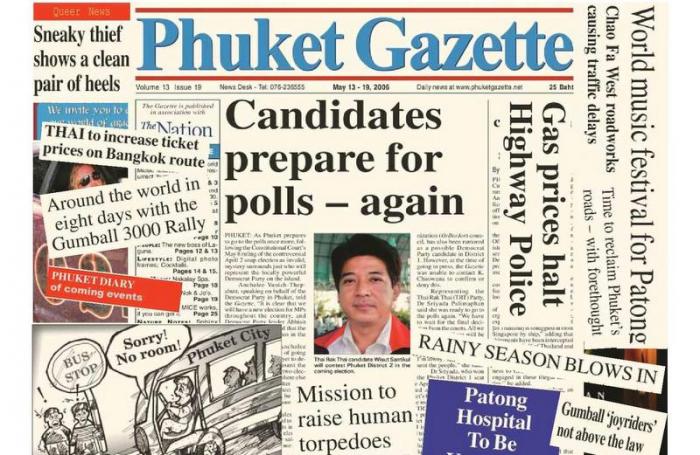 PHUKET: Politics were again on the front page of the Phuket Gazette in May 2006, following the Constitutional Court’s May 8 ruling against the snap elections for parliament on April 2. With the island burning a bright yellow, the big question was which member of the Democratic Party would be put forward to represent the island after clearing Thai Rak Thai in the polls.

Ten years later, the talk of general elections in Thailand continues to sizzle outside of the country. However, those of us on the inside are simply sizzling from the heat. Despite Songkran coming and going, the clouds carrying the rains usually ushered in with the celebrations have evaporated before hitting land. Islanders caught in traffic continue to blast their air conditioning as they attempt to beat the heat, especially those locked up in the Chalong Underpass construction.

“Motorists using Chao Fa West Road are feeling the pinch as work continues on the Phuket Provincial Highways Office project to resurface the main artery to the island’s southern beaches and widening it to four lanes,” reported the Gazette in the May 13-19, 2006 issue.

Now, just ten years later, motorists are feeling the same pinch as a small section of Chao Fa West Road is reduced to two lanes to allow for underpass construction. Business owners and residents south of the circle continue to fear the impact the underpass project will have on their lives once it is in full swing. With no viable alternative routes in place and officials dragging their heels in providing real solutions, many will just have to bite the bullet and weather the storm. Hopefully, the Chalong Underpass will follow in the footsteps of the Koh Kaew Underpass – which is well ahead of schedule – and not the Samkong Underpass, which has suffered from more than a year of delays.

It has always been well known that a speedy connection between the north and south will allow Thais and expats to better support community programs and events put on by establishments such as Boat Lagoon and Laguna.

And when it comes to Laguna, if you don’t know the legacy of James Batt, ‘Mayor of Laguna’, then you’re without a doubt a ‘new era expat’. Of course, those of us who don’t know Mr Batt, are much more familiar with Michael Ayling: after more than a decade of running Laguna, Mr Batt made room for Mr Ayling in 2006.

You might think that stepping into Mr Batt’s shoes would be intimidating, but Mr Ayling was up for the challenge.

“I want to keep the status quo and keep everything moving in the right direction. I’m taking over from James at a very good time, because the rebound [from the tsunami] is definitely underway and it’s a great time to be in the property market,” Mr Ayling said ten years ago, and for the next eight years that is exactly what he did. It wasn’t until 2014 that Mr Ayling decided to switch gears and leave his position as Managing Director of Laguna Resorts & Hotels.

Though Mr Batt and Mr Ayling have both moved on, Laguna continues to expand and develop its properties – forever probing the future of Phuket for opportunities. It does not take much talent in the art of divination to predict that strong establishments that are part of the foundation of our island community will continue to thrive.

Just as we can now jump into the Gazette‘s ‘Time Machine’, to discover that Patong Hospital received a 70-million-baht budget to upgrade its facilities to international standards in May, 1996, editors of the Gazette ten years from now will be able to tie the events of 2026 to the reflections in a ‘A Decade Ago’.