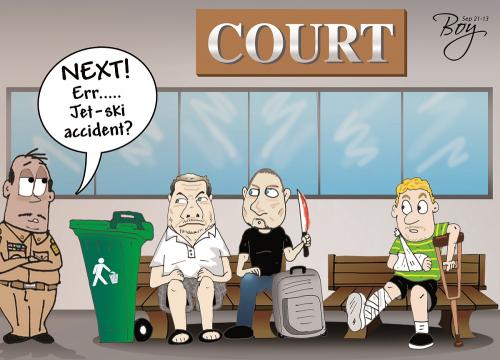 PHUKET: The opening of a new court to resolve non-criminal cases involving foreign tourists in Phuket tomorrow is a welcome step in the right direction, but only time will tell if the initiative will achieve its goal of bringing about prompt justice for visitors and improving Thailand’s image as a tourist destination abroad.

When the idea of establishing such a court was raised earlier this year, we were skeptical. We opined that the sheer number of legal and bureaucratic hurdles that would need to be cleared to establish a new, independent court under Thailand’s rather arcane judicial system would probably end up becoming just another “pie in the sky” dream that would never be realized.

Fortunately, we were wrong. The Administrative Court system has displayed a great deal of flexibility and efficiency in setting up the court, not as a completely independent body, but under a pre-existing mandate.

The court will technically be known as the regional “Tourist Protection Section” until it is eventually upgraded to full division status (story here).

While cautiously optimistic, we have many concerns about the functioning of the new court. Will it be administered under a framework similar to that commonly in use in “small claims” courts in the West and, if so, what criteria will be used to determine which cases can be adjudicated therein?

What criteria will be used to determine who qualifies to seek justice through the new body? Will it be restricted to foreigners here on tourist visas or will those with non-immigrant visas or even resident status qualify? Stateless people? Will foreigners who have overstayed – quite possibly as a result of having been victimized – be allowed to lodge cases as plaintiffs?

Many questions remain, yet one thing is clear: whether the court is effective will depend to a large degree on whether tourists are aware of its existence. This will require a great deal of publicity and assistance from honorary consuls, district police branches, Immigration Police and the Tourist Police, to name just a few.

A good first step would be to set up a comprehensive “tourist court” website detailing the exact scope of the court’s jurisdiction and procedures, accurately translated into the languages of all major tourist source markets.

We have reservations about the ethics of establishing a “special” court specifically for tourists, especially if cases involving Thais are delayed as a result.

The extraordinary nature of this kind of court is itself a cause for reflection on the extent to which Thailand relies on tourism.

Theoretical issues aside, if the court functions as hoped it could be a big practical improvement over the existing system that has needlessly inconvenienced and in some cases wreaked havoc on the lives of both Thais and foreigners, delivering benefits only to lawyers and corrupt officials.

Phuket Opinion: “Tis the season to crack down