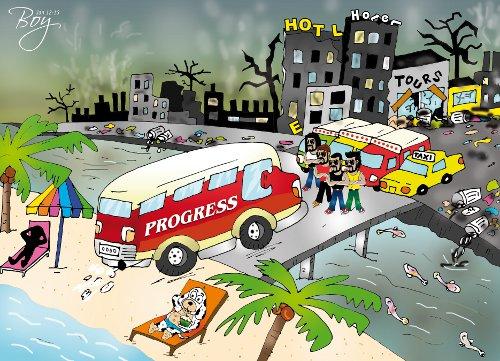 PHUKET: The recent police-ordered closure of tour counters run by Russian nationals in Kata-Karon is just the latest in a long series of protest-related events in Phuket that undermine the rule of law by rewarding law-breakers and punishing those who play by the rules.

The closure of the counters followed a blockade of the Karon beachfront by members of a so-called taxi “co-operative”, one whose self-proclaimed right to extort visiting tourists through collusion tactics is apparently deemed more important by police than the right of law-abiding citizens to drive on Patak Road.

The Kata-Karon co-op members are, of course, no strangers to protest tactics. They are the same group that in December 2002 took it upon themselves to form a mob to blockade Koktanode Road, successfully convincing police and other local authorities to force eco-tour operators to stop using their own vehicles to pick up passengers from local hotels – even though the practice is eminently legal.

Coming 10 years apart, the two protests serve as perfect bookends marking a full decade in which absolutely no progress has been made in tackling the activities of the local taxi syndicates, which have thoroughly besmirched Phuket’s reputation – not only among foreign tourists, but among visiting Thais as well.

The fact that protestors chose to set up the blockade right in front of the newly-opened Karon Police Station speaks for itself, demonstrating that the “drivers” have no fear of arrest and that they, not the police, will determine who can do what – and where they can do it.

We fully support the right of citizens to peaceful protest, yet this latest debacle was clearly illegal because the protesters blocked access to a public road. Once again, they thought nothing of inconveniencing thousands of people, and quite likely caused a certain number of unfortunate tourists to miss departing flights. After all, who else in their right mind would dare to help those tourists by picking them up in a place like Kata-Karon?

Let us not forget that this is the same turf where a songtaew (pickup truck modified to serve as a public transport vehicle) driver who had the audacity to run a route connecting Patong and Karon in 1994 was pulled from his vehicle and brutally beaten by local taxi drivers – just three days after he started the service. The route remains vacant to this day because no one dares to take it on out of sheer fear of a similar reprisal.

Few can fail to see the bitter irony in the fact that the illegal protesters actually appeal for sympathy as “locals” and wrap themselves in the Thai flag while breaking the Kingdom’s laws on a wholesale, daily basis – with flagrant impunity.

Phuket Opinion: Losing Patong’s beauty to the dust of progress