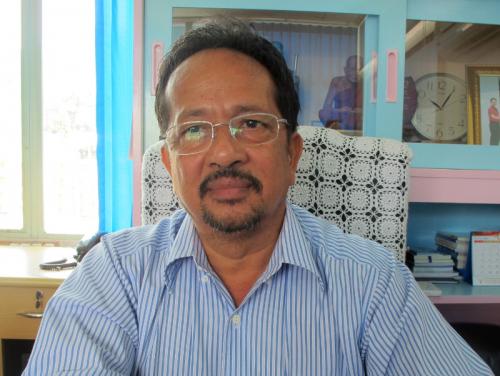 We have been holding our “scout training” courses for about six years. The first course this year was from February 11 to 14, followed by another from February 18 to 21. In each course there were 60 male and 60 female prisoners, all under 35 years old.

The aim of the courses is to solve community problems associated with drugs. More than 1,700 of the 2,190 inmates in the prison are there for drug-related crimes.

We believe the best way to reform drug-prisoners is to have them focus on positive activities. So, under this program, we follow the same principles of the National Scout Organization of Thailand.

However, we cannot allow the inmates out of the prison to perform the same duties as scouts. So we have them perform other forms of “community service”, such as taking care of the other prisoners, cleaning the prison and helping officers do administrative tasks, in order to earn their merit badges.

More than 1,000 inmates applied to join the courses, but we could accept only 120 in each course, so we selected prisoners from high-risk groups, such as new inmates and those who were involved with hard drugs.

The course takes only four days, but the results last a long time. The participants are now more disciplined and more responsible. I believe that if we give them more attention; make them realize they have not been abandoned; and make them feel that society still needs them, they will become valuable assets.

However, we need more financial support. Governor Maitri Inthusut, who chaired the opening ceremony of the first course, likes this activity and would like to support us so we can hold more courses each year.

He suggested we add two more courses each year. I would love to, but our officers do not have enough time as they have other duties as well. However, I will call in the relevant officers to discuss how we can do this. If we can manage the time, we might start a third course in a few months.

The Department of Corrections allocates 50,000 baht to fund each course. That is not enough, as we often have to hire speakers and experts, such as lecturers, from universities. The money also pays for scout uniforms for the participants. This helps prisoners create new personas that do not rely on drugs, but rather aim to provide a positive contribution to society.

Most repeat offenders are back for committing the same crimes as they did the first time. This is because some could not start new lives after their release, as society did not accept them, so they returned to their old habits and ended up in prison again.

Recently though, our inmates are being offered more opportunities by society. During their stay in prison they learn skills such as massage and handicraft techniques that they can use to get jobs after their release. Some massage and spa centers have even contacted us asking to hire prisoners after they are freed.

Giving prisoners opportunities to improve themselves is crucial to their playing a positive role in society after they are released. I am happy to see them receive strong support from the community. Any person can do wrong; no one is perfect. Once people realize the bad things they have done and they try to change themselves to be better people, they deserve the opportunity.