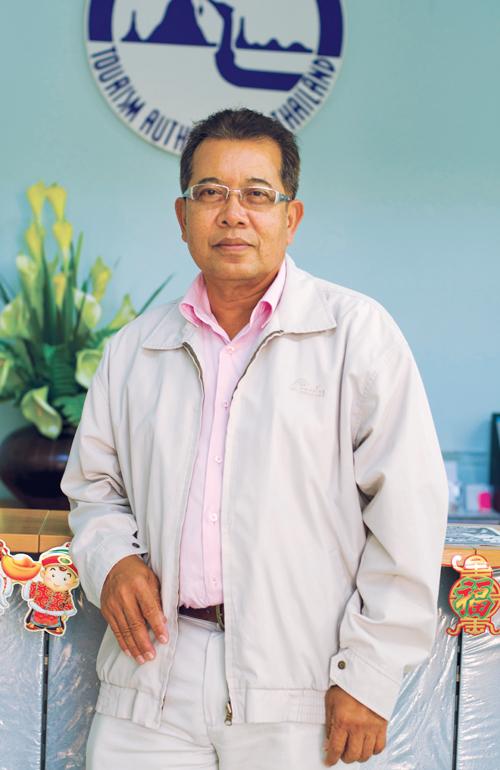 PHUKET: As the director of the Tourism Authority of Thailand (TAT) office in Phuket, Chanchai Doungjit needs no introduction. In a province where tourism is the main livelihood for most of the population and the industry’s marketing needs to be robust, the director is always in the media.

Just before our interview, Chanchai had been in a weekly meeting with the governor. “It’s just a routine meeting,” he says. “The governor likes to keep us abreast of what’s happening each week. He just got back from Turkey, and believes that country has potential to become our next tourist market.”

Considered one of the pu yais (high-ranking officials) here, Chanchai is delightfully affable and down-to-earth. His easygoing manner belies his seniority and long experience with the TAT, both nationally and internationally.

Chanchai belongs to the generation of Thais who looked to the civil service as an ultimate career path. “My friends and I had this romantic idea of becoming a nai amphoe (district officer) in some provincial backwater,” he laughs. But after a degree in political science and a few years working as a government researcher at Thammasart University, he was “itching” for some action. The opportunity came when he joined the TAT in Bangkok and was soon promoted to a posting in Kuala Lumpur.

“At that time, Malaysians were our top tourists,” he says. “They drove in via Haad Yai in Songkhla Province. We have good roads so it was easy to promote tourism then. The problem was the Thais’ way of driving, which managed to shock our law-abiding neighbors no end!”

After Malaysia, Chanchai was posted to the eastern province of Rayong, where he remained for seven years. His moment came when he was transferred to Los Angeles. As the TAT director there, his job’s remit was vast, covering not only the US west coast but also all the countries in South America. The work, he says, was long and arduous, but fun-filled at the same time.

“For one thing, there were fewer meetings compared to back home,” he jokes. “No, seriously it was a great experience. You could see the result as the number of American tourists increased year by year. Long live ‘Amazing Thailand’, he jokes.

In Los Angeles, Chanchai and his family (he is married, with a son) never felt homesick. “The Thais consider LA another province of Thailand; there were about 200,000 Thais living there alone, and that is from the census data only. And where there are Thais, there is always food and parties.”

After LA, Chanchai’s career took him straight to Phuket in mid-2012. He remembers his first impression here. “I was naive to think that Phuket was just another Thai province with perhaps a few more tourists than the rest. How wrong I was. I was stunned – I have never seen so many tourists in any one place!”

“In a way I am happy for people working in the tourist sector here. But I do worry about Phuket’s infrastructure, which is stretched to the limit.”

He continues: “Nowadays, the debate seems to be about which direction Phuket is going in terms of its tourism drive. For the time being, it all seems to be about leisure and quantity, but we may soon have to change our ways and look to other avenues instead. Tapping into sectors such as golf, weddings and honeymooners, as well as marinas and yachting, may provide the way forward.”

As the TAT boss, where does Chanchai go for his tee-ow (travel)?

“Thailand, of course! I love taking a long drive through the country – with no definite plan, stopping the night when the fancy takes me. That’s my kind of tee-ow.”

The individuals profiled in “Thai Gallery” are chosen on the basis of their contributions to Phuket as an international community, and, often, for having made those contributions through successful social and/or working relationships with foreigners. This implies some foreign language skills and an interest in interacting with different cultures. They are people who in our experience help make the lives of expats far more enjoyable here than might be the case without them.