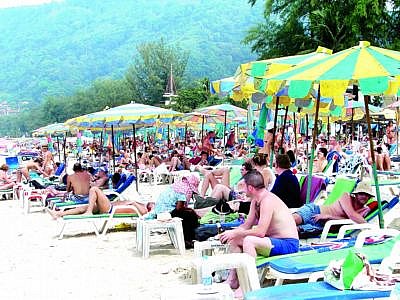 PHUKET: Some officials have branded as unfair the “star rating” figures for beaches recently released by the Pollution Control Department (PCD), saying the low ratings are bad for Phuket’s image and could harm the island’s all-important tourism industry.

Phuket is naturally blessed with some of the finest seaside real estate on the planet, but our collective efforts to maintain these most precious tourism assets have been abysmal to say the least.

It is easy to dismiss the PCD’s regimen as pseudo-scientific. Many of the indices used are highly subjective in nature, and those that do lend themselves to statistical analysis – such as coliform bacteria counts – only capture the state of the beach at the time of testing.

As a scientific exercise the rating routine is highly suspect, but the PCD’s idea to package its measurements in this way is probably intended more as a method of raising public awareness than a serious attempt to quantify a natural system as inherently dynamic and changeable as a sandy shoreline.

Relative merits of the PCD regimen aside, we don’t really need a scientific study to tell us that the state of our beaches continues to decline. The evidence is right before our eyes: seaweed and algal blooms, unthinkable a decade ago, are now commonplace at many beaches.

Once-abundant coral reefs close to our shores died long before the current bleaching problem set in, and sea turtles, once a symbol of Phuket, no longer nest on our beaches…. And the list goes on.

As depressing as all this might be, hope lies in the fact that if we simply cut back on our inputs of household waste, untreated wastewater, sediment-laden surface runoff, petrochemicals and other debris, the water quality at our beaches would immediately begin to rebound.

Phuket beaches enjoy two high tides a day, unlike Gulf Coast beaches which have only one, and strong-monsoon season currents produce strong mixing rates most of the year.

Unfortunately for the state of our beaches, the pace of development on the island shows few signs of slowing. The island’s population continues its meteoric rise, and last week alone a provincial committee approved eight more residential estate projects.

Last year, the number of passengers arriving at Phuket International Airport surpassed the seven million mark for the first time, while the government’s airport expansion plan is designed to increase passenger traffic capacity to 12.5 million by 2013.

These signs, plus the lack of community-based management strategies, do not bode well for the future of Phuket’s beaches. Nor do the voices in opposition to the ‘star ratings’ on grounds that these indicators might damage tourism, when in fact the opposite is more likely to be the case.

Phuket Opinion: Let’s get the sea gypsies off our list of tourist attractions