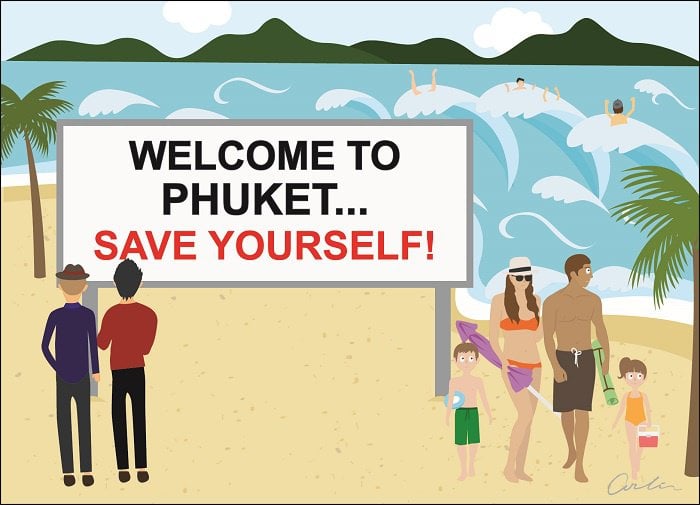 The two key governmental offices must also work out a long-term solution to end the annual contract disputes that have left beaches unpatrolled for long periods in recent years – and at the worst possible time: just before the annual southwest monsoon returns to whip up the surf into a lethal maelstrom.

Events in Phuket since the National Council for Peace and Order (NCPO) took control more than almost a year ago have shone the spotlight on security issues facing Phuket, with much of the focus correctly trained on illegal activities at the west coast beaches.

With few exceptions, most notably the notorious jet-ski rental industry, these threats have been neutralized, at least for now. Simultaneously, the island’s most precious natural resources have rightfully been returned to the public domain, where they can best serve as a natural tourism asset – rather than as a veritable flock of golden geese for corrupt local politicians, state officials and their minions.

Unfortunately, annual contract disputes between long-time service provider the Phuket Life Club (PLC) and its concessionaire the PPAO remind us that the key component of beach safety – drowning prevention – remains a serious and ultimately fatal flaw in our overall beach-management strategy.

The PPAO, under the stewardship of Paiboon ‘The Pink Panther’ Upatising, has maintained the regulatory transparent and cost-effective standards set for outsourcing the island-wide lifeguard concession under its annual bidding scheme.

One can only imagine how many more lives would have been lost, not to mention how much more money would have been wasted, had these concessions been locally administered by the same administrative bodies that now stand accused of operating the billion-baht beach plot rental scheme.

However, the failure, once again, to attract any bids under current PPAO requirements leaves these same beaches unguarded, as the so-called “drowning season” rapidly approaches.

As with any international beach tourism destination with world-class pretensions – not to mention some of the world’s statistically deadliest monsoon-season rip currents – Phuket must have lifeguards patrolling our beaches each and every day of the year.

It is depressing to think of how many times the phrase “ignored red flags and verbal warnings by lifeguards” has appeared in the reports of one drowning tragedy after another.

Each and every drowning death that occurs at a formerly patrolled beach will now serve as a reminder of the need to find solutions to a problem that, in essence, should not be hard to fix.