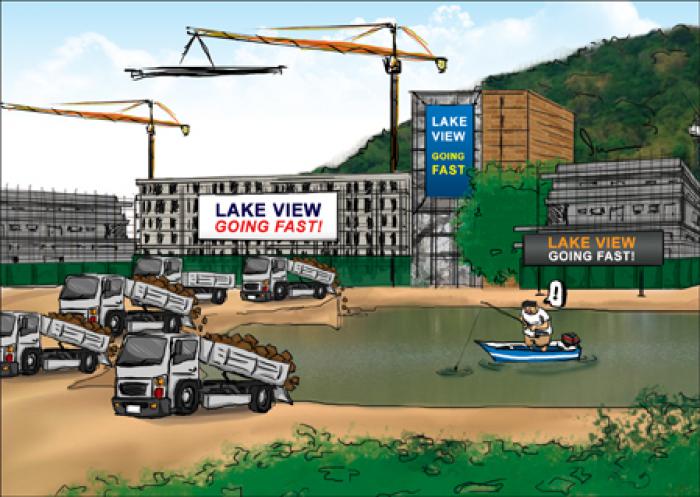 PHUKET: It is sad, but not surprising, that it took a recent public intervention to finally stop a well-known local Phuket businessman from backfilling an important water storage reservoir on the island.

Given our nation’s growing reputation internationally as a hotspot for protests, it is difficult to fathom why so few demonstrations on the island are ever fomented by the most painfully obvious of abuses: those to the environment that sustains us.

As every local resident knows all too well, Phuket has just been through its longest drought in 30 years (story here). It has easily been the most severe drought we have faced since the post-tsunami water shortage in early 2005, when the island was still reeling from the horrible effects of sea-water inundation that swept away everything in its path.

Mankind’s relationship with water could not run any deeper. Not only is water the very medium in which our prehistoric ancestors first evolved, but it still comprises most of our body mass. With the exception of air, water is perhaps the single greatest resource we all take for granted – until our supply is disrupted, of course.

The ability to manage and plan water supplies is a key indicator of the success of any society, and our greatest civilizations are all testaments to human ingenuity in water management. However, even in this new millennium, we are confronted with outrageous abuses to this most precious of shared resources.

Here in Phuket, we are blessed with more than abundant natural rainfall throughout most of the year, yet our inability to store enough of it for use during the dry season is well known and worrisome, especially in the face of the island’s ongoing population growth.

Rather than apply an island-wide approach, water-supply management needs to be based on HM The King’s “monkey cheeks” theory that emphasizes the use of small, community-run supply sources.

Nonetheless, the Bangkok-based Provincial Water Authority continues to periodically float the misguided ‘solution’ of pumping water all the way from the Chiao Lan Reservoir in Surat Thani. This is an ill-conceived and highly impractical project, albeit one with mega-potential for corruption.

Lacking any large, natural water bodies, Phuket is fortunate to have a landscape covered in tin mining ponds. It is just these water storage areas that must be protected as they’re all we have to sustain us through dry seasons.

Safeguarding health in a shifting populace