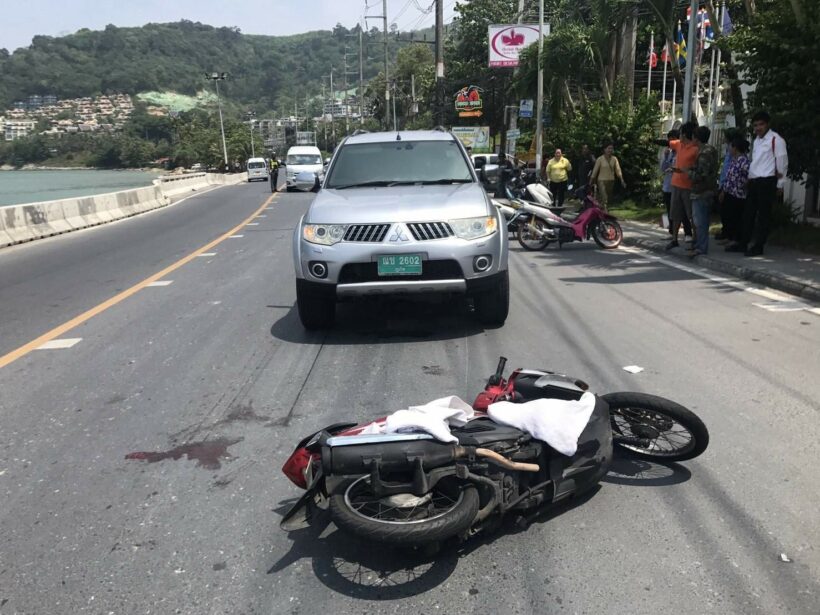 A crash between a van and a motorcycle in Kalim has resulted in one casualty and another critically injured.

The accident occurred in front of Soi Phra Baramee 7 on Phra Baramee Road, Kalim yesterday. Police found the yellow plate van driver, Suthep Yoosuk, and a French man, Dault Julien Sebastian, who rode the motorcycle, and Lamprai Pako who sat behind him on the motorcycle.

The French man was critically injured and died later at Patong Hospital whilst the woman was injured.

At the scene, police also found a green plate Mitsubishi taxi driven by Abdullah Yusoh and spoke to him.

After an initial investigation, police have been told that the van was coming from Kalim heading towards Kamala. The French man stopped the motorcycle in the middle of the road waiting to make a turn.

Suthep tried to overtake another motorcycle but missed it and hit the motorcycle with the pair causing it to lose control and crash into the green plate taxi which was coming from Kamala towards Patong.

The motorcyclist wasn’t wearing a helmet