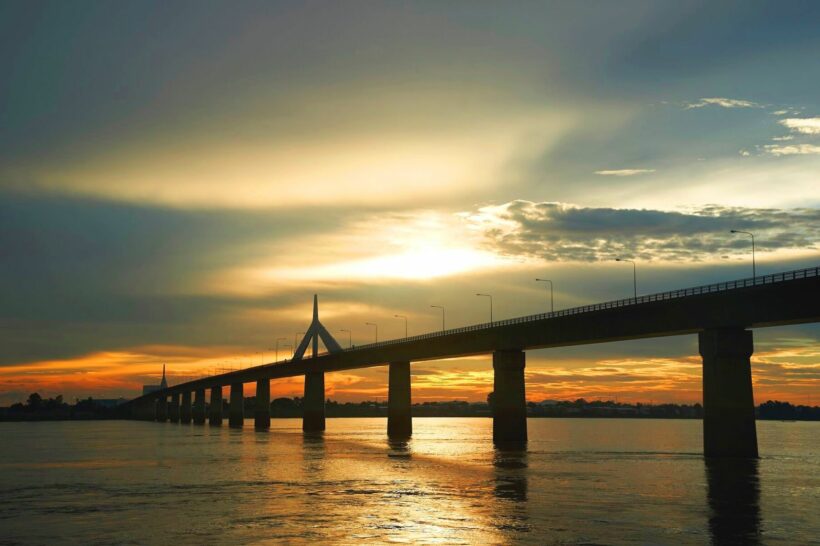 With pork prices skyrocketing and shortages looming, people are turning to chicken until it began being affected too, then crocodile meat, while many merchants call for an increase in the importation of pork products, and accusations fly of companies hoarding frozen pork. Now, instead of the more common busts of trucks full of meth pills or marijuana, police at the Lao border have seized the cargo of a transport truck carrying 20 tonnes of illegally smuggled pork.

The 18-wheeler was pulled over by animal quarantine centre officers on the Thai side of the border after crossing the Mekong River on the Second Thai-Lao Friendship Bridge. The bridge spans the Mekong connecting Savannakhet province of Laos with Mukdahan province in Northeastern Thailand.

The truck was pulled over at about 7:30 pm last night and when the container on the back of the truck was opened to be inspected, they discovered about 20 tonnes of illegally imported pork inside. The value of the raw meat was estimated at about 4 million baht.

The 18-wheeler belongs to a transportation company, and the driver of the truck said he was unaware of what cargo he was hauling and did not expect it to be an illegal shipment. He said that he had driven the truck from Bangkok across Thailand to Mukdahan before crossing over into Laos where his previous cargo was unloaded. Then a new container was loaded onto his rig and on Saturday evening he departed Laos travelling back into Thailand.

He said he was unaware of what cargo had been loaded onto his truck before crossing into Thailand. Authorities at the Muang Police Station in Mukdahan have seized the truck and taken the driver into custody where they will pursue the matter with legal prosecution on charges of smuggling the coveted pork into the country.

MikeW
The government is pissed because someone might be selling pork and they are not getting a kick back
Jason
Is this what they call pork barrelling?? Just import it from Australia...there's no shortage here!! I wonder what happened to the captured pork??
Graham
And the final destination / buyer is (unknown) ?

Marble-eye
Keep this to yourselves, I have heard that people are smoking pork these days.🚬