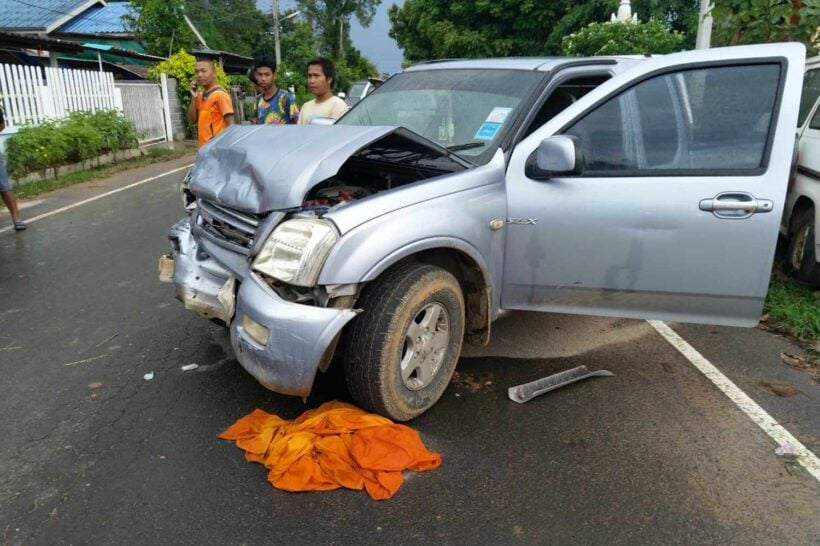 PHOTO: The was travelling in the pick-up involved in the collision - Surachai Piragsa

Investigating a fatal stabbing in Buriram yesterday, police now believe the woman who was stabbed by an Abbot, had been blackmailing him after having an affair. The fatal stabbing happened on a road near Ban Mai Charoensuk in Tum Yai, in northern Buriram yesterday afternoon, following a road incident. The victim, 36 year old “Lampai”, was 8 months pregnant

Eyewitnesses told police that the 59 year old Abbot of Wat Ban Nong Bua, Phra Um Deeruenrom, was driving a van and intentionally collided head-on with a pickup travelling towards him. The passenger in the pickup was Lampai. The vehicle was driven by “Thampaphon”, a public servant at the local tambon. The two vehicles were badly damaged in the collision.

Following the collision Lampai escaped from the vehicle and fled the scene. The monk chased her down, wielding a knife, caught her and stabbed her. The woman received two deep wounds – one to the head and another to her wrist. She died at the scene. Emergency responders raced her body to the hospital but her baby also died. Thampaphon, the driver, was injured during the incident but was unable to get out of the pick-up. Police tracked down the abbot who went to a relative’s house. He was arrested at the scene. Police claim he has admitted to the crime.

Speaking to villagers, police discovered that he had been having an affair with Lampai, claiming she had been trying to blackmail hem and threatening to expose the affair.

The former abbot has now been defrocked and charged with “premeditated murder” and “carrying a weapon in public”.