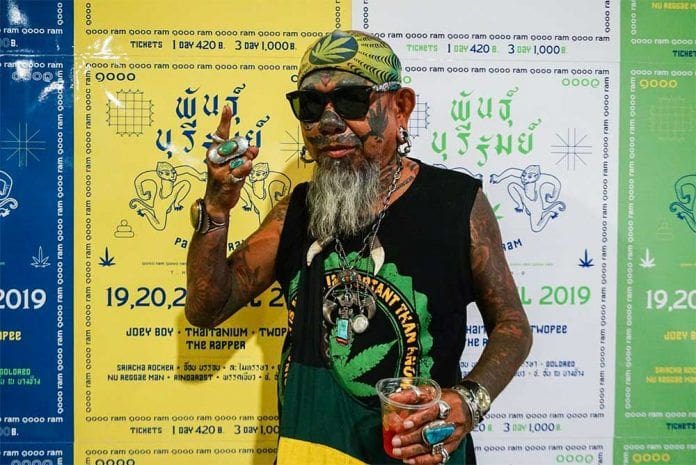 They pulled off the MotoGP event with flair and great organisation. Now Buriram is bracing for a very different crowd heading for the next big event. Taking advantage of the new liberalisation of laws governing marijuana and cannabis, the north-east festival hopes to bring together the many aspects of culture, opportunity and information.

Set to run three days at the F1 speedway in Buriram, “Pan Ram” expects to draw more than 20,000 daily attendees to celebrate ‘cannabis culture’ at the dawn of the legalization age.

The new pro-cannabis festival will feature everything from music and art to educational workshops and vendors selling, well we really have no idea.

Former political powerbroker Newin Chidchob, the man revered locally for delivering a world-class football stadium and racing circuit to what had been a neglected and impoverished rural province, is the man behind the new festival. Newin, now 60 and president of Buriram United FC, is throwing the ‘weed party’ together with several pro-marijuana advocates. Promotion of cannabis as a new cash crop in post-legalized Thailand is one of the central policies of the party he founded, Bhumjaithai.

The festival, a first for the northeastern region, aims to promote awareness and understanding of the plant which has been illegal since the Narcotics Act of 1979.

Marijuana is like a genie kept in the lamp a long time, and now it’s out. It’s our chance now to make use of it.

Clearly an advocate, Newin says he regards marijuana as a “nation-altering plant” and that legalisation will lead to saving lives and creating economic value.

The Bhumjaithai has even campaigned on allowing every household to grow six marijuana plants which could be sold to authorised agencies, something it says could generate over 420,000 baht income per year, per family.

Heading the project is his daughter, Chidchanok “Nan” Chidchob. She said the three day festival will welcome cannabis activists to lead talks and Rangsit University professors to host educational workshops on medical marijuana.

Nan says the event’s goal is to push for marijuana liberation and give everyone a “full-immersion experience” that covers all of marijuana’s benefits – economic, medical and recreational.

Pan Ram will run April 19-21 at the Chang International Circuit. The Formula 1 track is located in Buriram city, about 400 kilometers from Bangkok.

Tickets are listed at 420 baht per day, and 1,000 baht for all three days. More details will be announced at a later date. Those bringing valid medical certificates for one of the conditions that can now be legally treated with cannabis can enter free of charge.

The Thaiger does not condone or promote the use of marijuana or cannabis and provide this information for the entertainment and education of our readers.