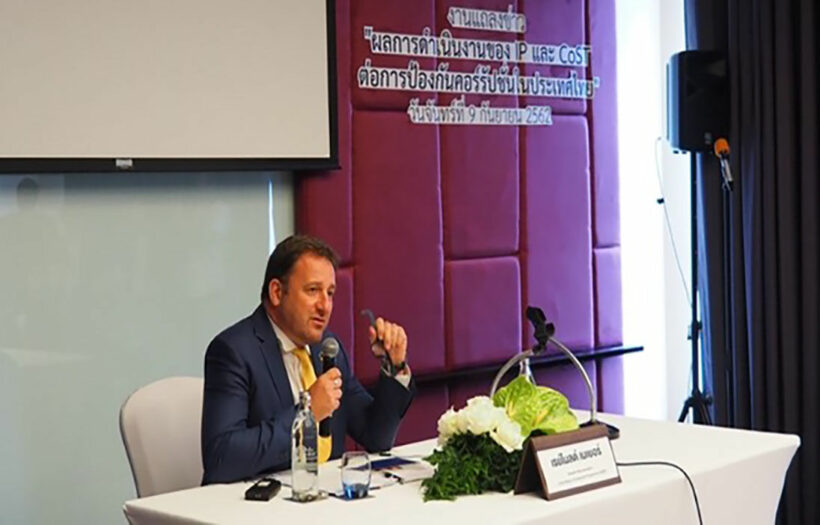 The chief of the United Nations Development Programme (UNDP), Renaud Meyer, is calling on Thailand’s lawmakers to do more to fight corruption.

While acknowledging the country’s efforts so far, he says certain influential figures and groups are a stumbling block to creating a less corrupt society.

He was speaking at a conference jointly organised by the UNDP, along with the Anti-Corruption Organisation of Thailand (ACT) and the United Nations Office on Drugs and Crimes (UNODC).

ACT secretary general Mana Nimitmongkol agrees, claiming that politicians are not seen to actively participate in the fight against corruption. He points out that very few of them made this a feature of their campaigns when running for election last March.

A number of tools used to detect corruption globally are being used in Thailand. They include an “integrity pact” (IP) for procurement projects valued at more than 1 billion baht, as well as the Construction Sector Transparency Initiative (CoST) for projects worth less than 1 billion.

It’s understood that such practices will save the government budget over 100 billion baht by the end of the year.

But Vichai Assarasakorn, vice chairman of ACT, says it’s not just about cutting down on procurement costs, but equally about collaboration between government and the private sector as well as civil society. He believes that public participation in government procurement projects brings good governance.

However, Mana says corruption still happens due to inconsistency in government policies, noting that those with enough influence, and groups with vested interests, can still get away with shady deals.

“The government and its agencies do what they want to do. For instance, public-private partnership [PPP] projects or large concessions such as duty-free licensing, are not under the IP initiative. In order to substantially eliminate corruption, all large public procurement projects should come under IP scrutiny.”

Thailand urged to do more on suicide prevention