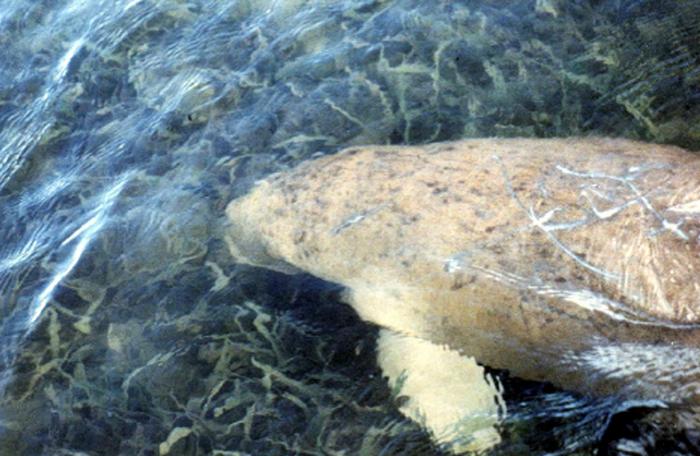 TRANG: A senior marine official has urged Trang fishermen to help a male dugong (sea cow) believed to be entangled in a dragnet.

Kongkiat Kittiwattanawong, the head of Phuket Marine Biological Centre’s Rare Sea Animal Division, said the animal was spotted during the division’s latest annual survey of the seagrass zone off the province.

“We have been monitoring him and found that this teenage male dugong swims slower than usual,” Mr Kongkiat said.

“Although it can still find food by itself, there is a risk that a seine [that the animal is presumed to be somewhat entangled in] might one day get caught on a big undersea rock and trap this animal under the sea.

“It will die if it can’t swim to the surface and get some oxygen.”

He told fishermen to alert officials if the animal was injured.

According to an annual aerial survey that concluded on Wednesday, Thailand’s dugong population is growing, with at least 15 more sea cows counted in the Trang Sea. Twelve pairs of dugong mothers and calves were found – a positive sign that efforts to conserve the last and largest dugong herd in Thailand have made progress.

Fishermen in the area have co-operated by not using dangerous fishing gear. Still, at least one dugong was found entangled in seine fishing net near Koh Libong.

This year’s survey started on March 3 and was made up of 10 gyroplane trips – which counted rare marine life including sea turtles, dolphins, whales and dugongs.

Mr Kongkiat led the survey with support from other Thai and Japanese researchers.

“This latest survey was very successful. We found at least 150 dugongs in total, an increase from the previous year’s 135 sea cows. We also found baby dugongs in the area, which indicated the dugongs’ better reproduction condition. The oldest dugong is believed to be about 70 years old,” Mr Kongkiat said. “Plus, Trang’s 35,000 rai of seagrass appeared to be healthy.”

Last year, six dugong deaths were reported, mostly because of hazardous fishing gear, Mr Kongkiat said. He added that PMBC aimed to keep the death rate under five a year.

The center must boost local people’s awareness about hazardous fishing gear and rubbish in the ocean to minimize threats to marine life and invite the public to participate in conservation efforts, he said.

Deal offered to mafia who mend their ways

Student loan debt to be deducted from salaries