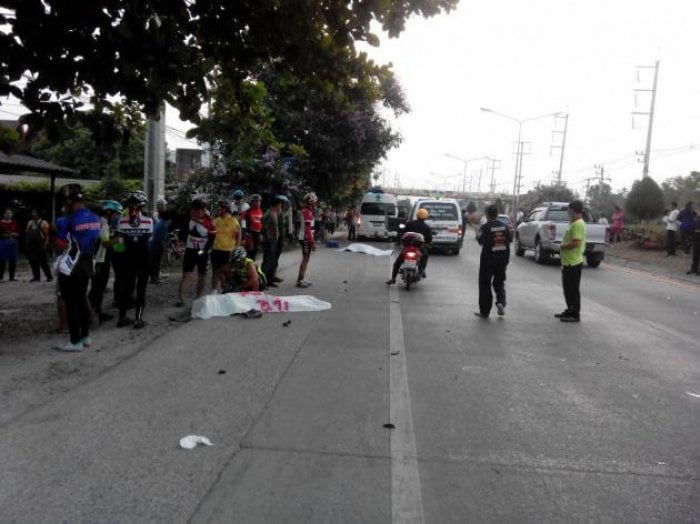 PHUKET: Three cyclists were killed and two others seriously injured when an alleged drunk driver crashed her car into their bicycle rally in Chiang Mai’s Doi Saket district yesterday morning.

The tragedy happened on a popular stretch of road for local bicycle enthusiasts to ride in a convoy as a health-promoting leisure ritual in this northern province.

Two other victims were in critical condition. Phongsak Polsing has been admitted to Lanna Hospital and Suphon Tasing is being treated in Maharaj Nakorn Chiang Mai Hospital.

Maj Suriyan said the black Toyota car was found capsized on its roof at the scene. The 23-year-old alleged driver and student, Patchuda Jairuean, had a broken arm. Police claimed she was drunk when her car crashed into the bicycle rally. They also suspect she may have fallen asleep while driving.

They said blood-alcohol tests showed Ms Patchuda had 67 milligrams per cent of alcohol in her bloodstream – beyond the legal limit of 50mg.

Ms Patchuda was being treated at Lanna Hospital and police would notify her of drunk-driving charges after treatment.

Monkol Ngamkayan, a Sansai Bicycle Club member who witnessed the accident, said 20 club members were riding along the Chiang Mai-Chiang Rai Highway when he heard the impact as the car hit the last five bicycles of the rally. Mr Monkol said that after crashing into the bicycles, the car swayed and hit a street light pole on the traffic island and turned over. The three bikers were killed instantly and all five bicycles were badly damaged.

Mr Monkol said the club members met every Sunday and rode from Chiang Mai’s Sansai district to Mae Kachan in Chiang Rai. The group always rode in a single file along the left edge and carried reflectors on all bicycles.

Boonchin Sawamool, head of the Chiang Mai Sunday Cycling Club, said accidents to bicycle riders were mostly caused by drunk drivers in the early morning – the time when many revellers returned home from partying all night. He suggested cyclists should ride in the late morning to escape those drivers and on local roads to avoid speeding cars.

According to Boonchin, there were around six cycling deaths in Chiang Mai in the last two years and the ‘most dangerous’ route for cycling in Chiang Mai was the road to Ratchapruek Royal Park.