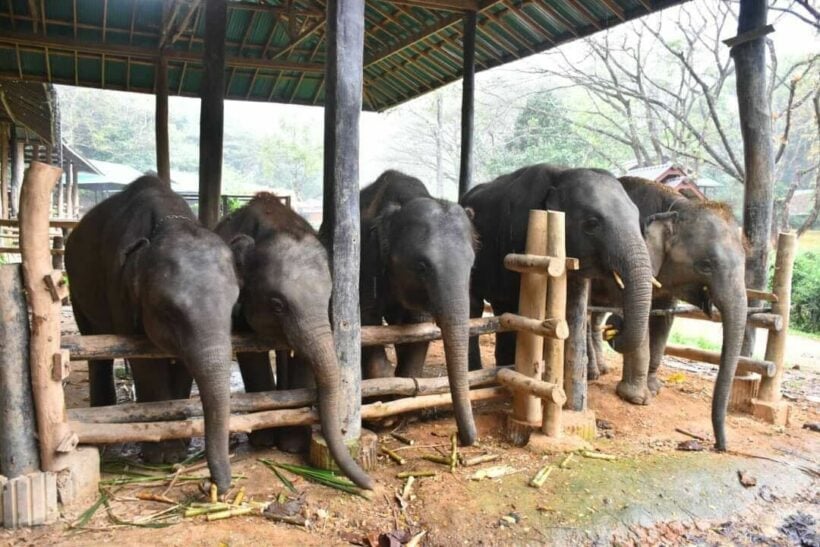 Another elephant from Maesa elephant camp in Chiang Mai died on Friday, making it the 22nd elephant to die at the camp in the past two years. Without almost no income from tourists during the Covid-19 pandemic, many camps and sanctuaries have been struggling to provide care and food for the animals.

A 50 year old male elephant named Krung Rattana died on Friday just as staff were about to lift him into a truck to seek treatment at the Elephant Conservation Centre in nearby Lampang province. The elephant was chronically ill and had previously received full treatment from the camp’s veterinary team, but after not eating a proper diet for two years, the elephant did not survive.

Monks and a local doctor of folk wisdom have since conducted a ceremony for the elephant to ward off harmful spirits, which involved lighting incense and offering sugarcane, before burying Krung in the elephant cemetery.

Caring for elephants costs a lot of money, explains Anchalee, because together they eat 10 tonnes of food every day. Maesa has only 110 employees which are one-third of the 330 employees the camp had two years ago. Tourists used to volunteer at Maesa, but the camp hasn’t seen any tourism in a long time. Now, the camp has only 50 mahouts, or elephant trainers, with many having to take care of two elephants.

When founder of the elephant camp Chuchat Kalmaphicit died aged 62 years old, he left one billion baht in inheritance. However, the inheritance is currently not being used to look after the elephants because it lies with the relatives of the founder. Anchalee has sold land and her house to manage labour, food and mahout costs.

If you would like to sponsor an elephant at Maesa, visit https://maesaelephantcamp.com/

Scribble
It's sad this implies the founders descendants who inherited 1 billion ($30 million U.S?) aren't helping out. You'd think there was at least one relative who cared about his legacy. I bet they're all burning incense and praying for more…