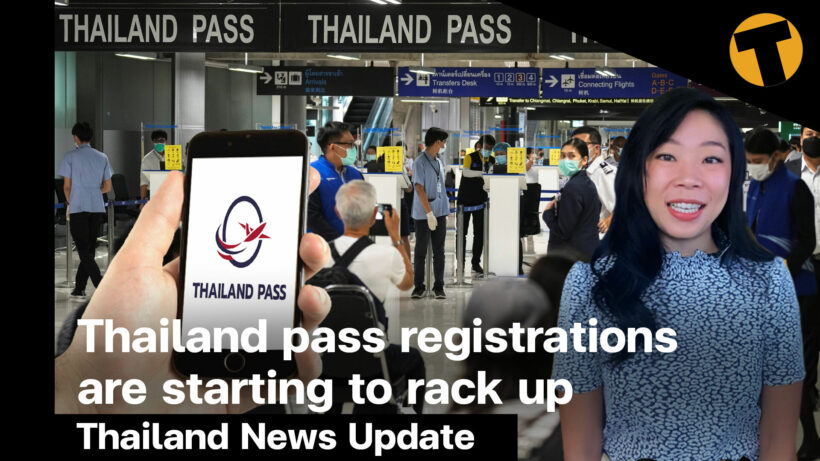 Thai PM Prayut Chan-o-cha made a statement yesterday attaching importance to using what he described as “soft power” to promote tourism and culture, placing emphasis on wellness and health tourism. Meanwhile, the deputy PM and Public Health Minister Anutin Charnvirakul doubled down after almost universal online criticism about the two tests required for Test & Go arrivals, saying that the additional testing is a safe approach to handling visitors and containing the spread of the virus.

Asked if the government will consider easing current Covid restrictions, like allowing nightlife and bar venues to reopen, Anutin again reiterated that such venues must be strictly controlled, though they are currently allowed to operate as restaurants to earn money and keep their businesses running.

He “said that…. Almost all clusters of infections started from alcohol consumption, and strict controls must remain in place.”I’ll update today’s Covid statistics at the end of today’s other news.

Thai authorities say they are determined to take steps to end the longstanding problem of tiger poaching. The move follows last month’s case where two Bengal tigers were killed at a national park in the western province of Kanchanaburi. Park officials found the Tiger pelts hung up at a camp and the meat cooking on a grill.

The country’s Department of National Parks, Wildlife, and Plant Conservation is now taking action to protect the wildcats. These steps include banning people from raising cows in national parks and wildlife sanctuaries in Southern parts of Western forests and creating a joint committee with environmental organisations that will prepare 10-year plans to conserve wild tigers.

Last month, five people allegedly poached two Bengal tigers in Khao Laem national park in Kanchanaburi. The poachers claimed the tigers had eaten 20 cows that belonged to them and local farmers. All poachers had to leave their homes in the park within 30 days. If they didn’t comply, they had to pay a fine of between 400,000 and 2 million baht.

A car has been found buried at a palm plantation in the southern province of Nakhon Si Thammarat… but what is interesting about the case is that the vehicle belonged to a 52 year old American man who, according to reports, left the country 10 years ago.

The bronze BMW had been buried about a metre deep. Once the vehicle was uncovered, officers checked the registration numbers and found the car was owned by an American man named Michael. When police visited a home in Phuket that the man used to rent, neighbours shared that they used to see the man driving the BMW car before, but he left the house long ago.

Reports say that the man travelled out of Thailand through the Suvarnbhumi Airport immigration checkpoint back in February 2012. Thai authorities are now trying to contact the American to find out what led to the burial of the car. The palm plantation owner will also be investigated to see if there’s any connection to the case.

A Thai sugarcane farmer in Prachin Buri and his brother-in-law are dressing up as Batman and Superman to attract more customers. The big S on his chest is a good start! Sales had dropped since the Covid-19 pandemic, and the two needed a new way to market their crops.

The two men sell sugarcane juice every day between 1pm and 3pm at an intersection in Krabin Buri, a district in Prachin Buri. They say, once they started wearing the costumes, many bikers noticed them, and stopped to buy a drink.

Food vendors are one of the industries in Thailand hit hardest by the pandemic since would-be customers have been scared to buy street food because of the fear of spreading germs. Meanwhile, the demand for food delivery in Bangkok rose from a 68.8 million baht business in 2020, to 74 million baht in 2021. Euromonitor says it could be as much as 99 million baht in 2024. By the way, if you’re driving past Superman and Batman in Prachin Buri, just to the east of Bangkok, drop in for a quick drink with the superheroes.

A cemetery in the northern province of Phichit showed movies, traditional performances, and fireworks on February 1. A lot of effort to honour the dead on Chinese New Year.

The performances and fireworks began at 5pm, honouring the cemetery’s local guardian spirits. The cemetery’s foundation then screened three movies, for the deceased in its 330 graves. The movies catered for all tastes and were Thai and Chinese classics. The foundation has hosted performances and screenings on Chinese New Year for 57 years in a row.

Restrictions during the Covid pandemic have hit Chinese New Year celebrations hard in Thailand, with festivals cancelled in Bangkok’s Chinatown, although there were still a few dragons and fireworks welcoming the Year of the Tiger.

Although the Philippines is set to reopen its doors to fully vaccinated international visitors this month, the US Centre for Disease Control is advising its citizens not to travel there due to a “very high level” of Covid-19 infections.

The CDC released a statement that anyone planning to go to the Philippines may still be at risk of infection with the virus even if their vaccinations are up to date and urged them to be vaccinated properly. The Philippines is one of around 130 countries and territories with a “Level Four: Very High” advisory by the US CDC.

The Philippines is reopening to fully vaccinated travellers on February 10 after nearly two years of closed borders due to the Covid-19 pandemic. Travellers from 157 countries will be eligible to enter without undergoing a quarantine period. They will just need to test negative for Covid before arrival.

Yesterday the Philippines reported +9,465 new infections, showing a substantial downward trend over the past two weeks, and a similar number to that reported in Thailand yesterday.

Poolie
19 minutes ago, BillO said: My daughter who’s a physician, husband, a GoDaddy exec and kids were going to come visit us here and drop over a million baht on the local Thai economy, but the second hotel requirement turned…
LoongFred
3 hours ago, Poolie said: She booked a cruise to avoid testing? A cruise? Good luck..... Doesn't make sense to me.

Poolie
30 minutes ago, LoongFred said: Doesn't make sense to me. Have a look at cruising as a method of avoiding covid.

Fundok
21 hours ago, BillO said: My daughter who’s a physician, husband, a GoDaddy exec and kids were going to come visit us here and drop over a million baht on the local Thai economy, but the second hotel requirement turned…

Fundok
On 2/2/2022 at 11:00 AM, Thaiger said: Around 2,500 travellers flew into Suvarnabhumi airport yesterday… the first day of the rebooted Test & Go program. The passengers arrived on 46 different flights. Just some quick maths suggests that’s around…