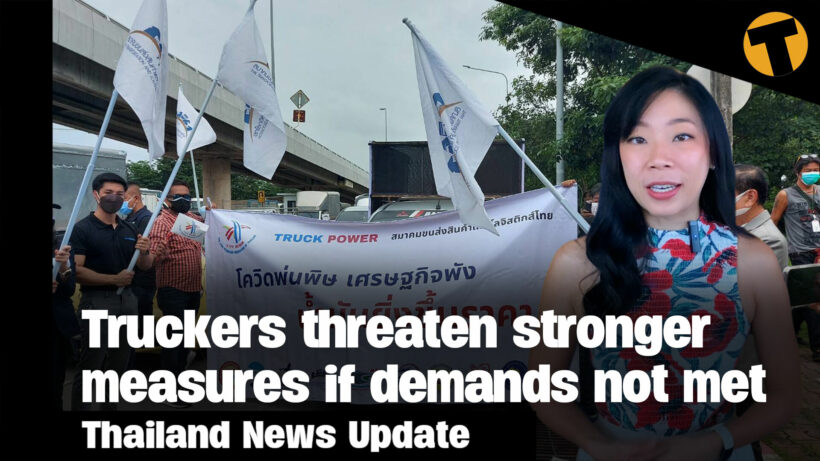 Another CCTV angle and additional evidence has emerged in the gruesome hit job that ended the life of Indian-born drug criminal Jimi Sandhu. He was killed with a volley of 20 bullets in Rawai, at the southern end of Phuket last Friday night, just before 11 pm. The footage shows two barefoot men wearing white hoodies and shorts appearing from buses next to Jimi’s villa. The white hoodies were found about 2 kilometres away in a rubber tree plantation. It’s also been revealed that Jimi owned the villa and arrived on the southern island on January 27 on a private jet. Canadian media have already revealed much about the victim’s extensive primal history and his recent comings and goings between Dubai and South East Asia.
——
The Land Transport Federation of Thailand, a union representing Thai truckies, is vowing to step up its campaign against the Energy Minister if he fails to do something about Thailand’s high diesel prices within 7 days. The second of the “Truck Power Final Season” protests was held yesterday. The first was held back in November first “Truck Power” protest was held in November. Truckies say they will stay camped out in front of the ministry to pile on the pressure on the minister, and more trucks will arrive to support the push. The LTFT are also considering an across-the-board rise transport fees by 15-20% to reflect recent increases in diesel prices. They’re also threatening to call in farmers who are the next in line suffering the high diesel prices and could rapidly escalate the situation.
——–
A food delivery driver riding his motorbike on the sidewalk nearly hit a man walking out of a shop in Bangkok. The rattled pedestrian yelled and the driver who then jumped off his bike and attacked the man. The food delivery driver, who sports a face of demonic tattoos, surrendered himself to police and was then paraded in front to the media where he apologised, saying he would never do something like this again and would be a better person. A video of the incident went viral on Facebook yesterday after the 26 year old pedestrian asked Thais to help find the man who attacked him. Meanwhile, the food delivery company have come out with a statement saying the man doesn’t work for them and has never registered to be a delivery driver. The man apparently borrowed the jacket from a friend, whose account with the SCB-owned delivery company, Robinhood, has now been dismissed.
——-
The owner of a luxury sports car has reportedly filed a lawsuit against their neighbour claiming 100,000 baht in damages after a cat climbed and sat on top of their black and yellow Lotus sports car, allegedly causing some scratches. The story has been widely shared in Thailand and the tetchy owner has since apologised, adding that he doesn’t want the money after all. The cat owner posted a video on TikTok saying her neighbour demanded compensation for letting her “fierce or wild animal” out in public and causing damage to others’ assets or property. But it’s also emerged that the incident happened back in October 2020 when a child accidentally let their cat out of the house. That afternoon, the car owner sent the neighbours a video of their pet sitting on the sports car. Video from a home surveillance camera shows the cat sitting on top of the black and yellow sports car. The threats of court cases and claims of 100,000 baht in damages have been going since then. Photos have also been shared showing a few dirty paw marks but no scratches. The only winner here seems to be the cat who, at least fleetingly, had a warm place to have a sleep.
——-
At least 13 people have been killed in a bus crash on Indonesia’s Java island on Monday. Dozens of passengers, including young children, were injured. Many were factory workers on their way to a beach for a holiday trip. The bus carried 47 people travelling from Central Java to Yogyakarta for a family gathering. The driver apparently lost control while driving downhill.Witnesses have told police that the bus flipped over, slamming into the side of the road with its right side severely damaged and front shattered. A total of 34 passengers were injured and sustained head injuries, including three toddlers.
——-
Following moves from other Southeast Asian countries, like Thailand, to gradually reopen borders, Malaysia is considering a full reopening of borders starting March 1, allowing vaccinated travellers to enter without mandatory quarantine requirements. The plan is to speed up the country’s economic recovery, according to its coronavirus recovery council. The country, directly to the south of Thailand’s southern border, has recently allowed Singaporeans to enter without quarantine as part of a bilateral agreement. A government advisory body said travellers would be subjected to Covid-19 screening prior to departure and upon arrival. Coronavirus infections in Malaysia have risen to their highest level in four months in recent weeks, which officials say is due to the spread of the Omicron variant. Around 98% of Malaysia’s adult population has received two vaccine doses and more than half have received a booster shot. Approximately 89% of children aged 12 to 17 have also been vaccinated.