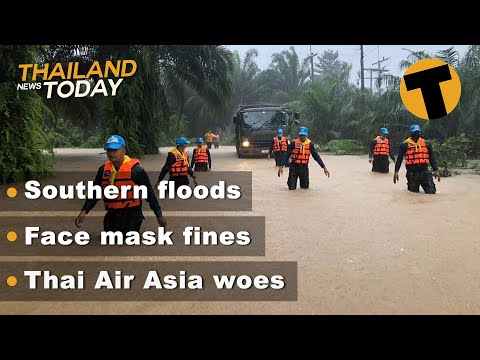 Thousands of residents in Songkhla, Yala and Narathiwat, in the very south of Thailand, have been evacuated from their homes due to flash flooding from nearly a week of almost continuous heavy rain.

Local authorities say a total of 18,024 households across 19 districts have been impacted.

In Yala, the Sai Buri River has burst its banks, flooding homes and farmland. The director of Yala’s Irrigation Project Office says they remain worried about the low-lying areas, adding that the total amount of rainfall to date has broken records set more than a decade ago.

Landslides have also been reported but with no report of fatality or injuries.

In Songkhla, 2 districts were flooded by rainwater coming down from the mountains, while some residences and farmlands on riverbank areas of Narathiwat were flooded. Local government agencies said food and other aid were already sent to the affected areas.

Only essential travel is now allowed to and from the 5 coastal “red zone” provinces. The new travel restrictions for Samut Sakhon, Chon Buri (including Pattaya), Rayong, Trat and Chanthaburi are now in place.

Checkpoints have been set up throughout the 5 provinces and screening procedures are now more stringent. Those who need to travel to and from the provinces will now need permission from local authorities. People passing through checkpoints must use the Mor Chana tracing application and have a temperature check.

U-Tapao Airport, which services Pattaya and the eastern provinces, has been largely closed to domestic traffic for the time being.

Thailand’s Internal Trade department has investigated the 7-Eleven chain of convenience stores over allegations of price-gouging over the sales of face masks.

But he points out that imported ordinary masks cannot be marked up by more than 60%.

Speaking of face masks, if you’re in Phuket, wear a mask or pay a hefty fine… and possibly even go to jail. Phuket’s governor has issued an immediate order requiring people to wear a face mask while in public, or you could face a 20,000 baht fine.

Those who breach the order can also face punishment under the Communicable Disease Act which carries a fine of up to 100,000 baht and up to a year in prison. People can also face penalties under the current Emergency Decree which was recently extended again.

The Governor said… “Any person who leaves their home, residence in a house, house, building, place or vehicle, or is in a public place must always wear a face mask or cloth mask.”

The executive chairman of Asia Aviation, the largest shareholder in Thai Air Asia, says the Covid-19 resurgence has “destroyed the low-cost carrier”.

Tassapon Bijleveld says that, even without a national lockdown, bookings have plummeted for the low cost carrier.

He said… “Travel sentiment has plunged lower than last year. This is different this time because people are voluntarily skipping their travel plans even without a nationwide lockdown order from the government.”

Despite the Thai government introducing extra holidays over the Chinese New Year period, Tassapon predicts that the new wave of Covid-19 will deter a lot of domestic tourists from travelling.

This month, Thai Air Asia bookings have dropped by over 50%, with the carrier forced to merge and cancel many flights. Some aircraft carried only 20 – 30 passengers, a significant drop on numbers just 2 months ago.

He says that Thai carriers are fighting for survival and if the market doesn’t pick up soon, some may go out of business.

The Thaiger has also done a video specific to the More Chana track and tracing app that the Thai government is asking people to download and use. There’s been a lot of questions about the app and how it works and we hope that that short segment will explain a lot more about what it does and how it will work. You can find that video on The Thaiger You Tube channel or on our Facebook page.