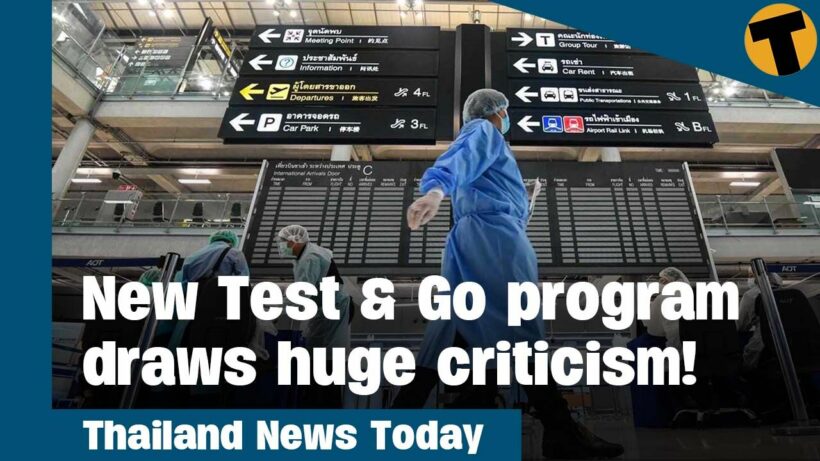 In today’s news, again, new entry requirements are criticized for being too expensive and not making much sense. Meanwhile, Pattaya walking street wants to shape itself up for the kids, and over a hundred police officers failed to catch a handful of drug suspects…for the fourth time. All this is coming up in today’s program.

You’re watching Thailand News Today, bringing you the top headlines in Thailand and beyond. And in today’s news,

Following the CCSA’s decision yesterday to resume Test & Go from February 1 (with some changes) tourism operators are urging the government to make PCR testing more affordable.

The revamped Test & Go entry scheme now requires overseas arrivals to stay at an approved hotel on day 1 and again on day 5 of their stay – and to take a PCR test on each day. They must Netflix and chill in their hotel rooms after each test, until they receive a negative result.

However, what has many people scratching their heads is the fact that in between both tests, people are free to wander wherever they like. Test & Go does not require travelers to book the same hotel for days 1 and 5, or even to stay in the same province.

Tourists can arrive in Bangkok on day 1 and by day 5, be in Chiang Mai for their second test and mandatory hotel stay. What is also not known is whether the government will consider infections detected on day 5 as imported…

The new requirements have tourism operators concerned that tourists will be put off by the additional costs, especially the second PCR test. Ratchaporn Poolsawadee from the Tourism Association of Koh Samui says PCR tests on the island cost 2,200 baht. He wants that price cut to 1,500 baht, as otherwise, it could be a deterrent for people traveling on a budget.

Meanwhile, มาริสา สุโกศล หนุนภักดี from the Thai Hotels Association says officials need to design a system for the new testing requirements prior to Test & Go resuming. She suggests that the second test should be dispensed with once the Covid situation improves.

Phuket officials have responded less than enthusiastically to a suggestion that infected asymptomatic tourists be allowed to travel via a sealed route.

The province’s deputy governor พิเชษฐ์ ปาณะพงศ์ believes infected tourists should stay put in their hotel rooms. However, there may be some leeway, in that asymptomatic tourists could travel to a quiet beach via a sealed route, for example, but he says the arrangement would need close monitoring – lest they wander off.

Meanwhile, the issue of tourists not wearing face masks has raised its exposed head again. Pichet says many foreign tourists are violating the mask mandate and he’s vowed to take legal action against them.

In other news, Phuket has kicked off the administration of booster doses to around 3,000 migrant workers in the fisheries sector, with healthcare workers administering the AstraZeneca vaccine at Phuket fishing pier.

The island has around 67,000 migrant workers across various sectors.

The Thai Prime Minister says he has no plans to call an early election or to reshuffle his Cabinet after 21 of his MPs were pushed out earlier this week.

Prayut Chan-o-cha has also distanced himself from the ouster of ธรรมนัส พรหมเผ่า and 20 other MPs, who have been accused of sowing division within the ranks of the ruling Palang Pracharath Party. The PM says their dismissal was an internal party affair and that the party was probably trying to restore a sense of normalcy.

In his signature jarring syntax, the PM said, quote “I’m not saying who is good or bad. Let their actions speak for themselves. The people will decide at the next election. I insist that I have no intention to change the cabinet line-up or dissolve the House. The law (on the new election system) is not ready. Don’t mix them up.”

The dismissal of พรหมเผ่า and the other MPs means they now have 30 days to find a new party or lose their MP status. Their removal follows Thamanat’s sacking from Cabinet a few months ago, accused of trying to orchestrate the removal of the PM in a no-confidence debate last year.

According to media reports, 8 small coalition parties are considering an alliance with Thamanat. However, leader of the New Democracy Party สุรทิน พิจารณ์ says things are only at the discussion stage at the moment and things should become clear next week.

Meanwhile, the Puea Chart Thai Party has denied suggestions that his party might join Thamanat, insisting that 5 parties will remain aligned with the ruling coalition and continue to support the PM.

And when asked if the ruling party leader and deputy PM Prawit Wongsuwon had any comment to make on the latest developments, the PM responded, in HIS signature vagerie “Love and best wishes and mutual respect.”

Renovations to Pattaya’s famous Walking Street are about 80% complete, and according to the city mayor, the project aims to clean up the redlight street and draw in tourists of….all ages…Oh my!

Mayor สนธยา คุณปลื้ม told Thai media that overhead electric and communication wires have been moved to the underground to make the street appear more beautiful and orderly. The business owners and artists will be invited to paint and design the footpath and road in the Walking Street area to offer an iconic look. The street was often waterlogged during the rainy season, so drainage pipes are now being improved.

Pattaya officials want to draw in visitors to the street both day and night. Officials are now in the design process for a retractable roof that would cover the street, allowing people to visit the street anytime of the day as well as during the rainy season. The construction is expected to start in 2023.

Sontaya also added that a rumor about tearing down the street is not true, it is under construction and renovation. The business owners on Pattaya Walking Street are assured that their businesses will be recovered after the Covid restrictions are lifted.

So what do you think? Would you take your family to the revamped walking street? Or is it too risky to get recognized by a former bar girl? Let us know in the comments.

Following the naming of Indonesia’s new capital by President Joko Widodo to replace sinking Jakarta, candidate for Bangkok’s governor position สุชัชวีร์ สุวรรณสวัสดิ์, wrote on his Facebook page that he had no plans to relocate the country’s capital due to the decades-long flooding that has hit Bangkok, and believe it or not, Bangkok is also sinking…let’s hope not metaphorically as well.

The Bangkok gubernatorial elections are likely to take place this year. However, the Election Commission has yet to declare the specific date, owing to the Covid outbreak and political protests across the capital. สุชัชวีร์, who is the former president of King Mongkut’s Institute of Technology in Ladkrabang, is running for Bangkok governor under the Democrat Party’s banner.

In the post, he wrote that the motive had reminded him of the same issue in Bangkok. He claimed the flooding is at the top of his priority list and it’s the reason he decided to run for the governor’s position.

The incumbent governor, Pol General Aswin Kwanmuang, has been in office since October 18, 2016, although his term is limited to 4 years.

After a gunfire exchange with more than 100 police officers, five drug suspects reportedly evaded arrest. Apparently, they have been escaping arrest at least three times prior. Suspects, including alleged gang leader, 41 year old ประดิษฐ์ มุสิกะสงค์ are wanted on several charges.

Dozens of police officers set up a blockade at a resort in the southern province Phatthalung, but the suspects reportedly quickly drove a car out of the property. Officers were able to catch up, but one of the suspects apparently used an M16 military-grade rifle. Officers fired back and say they believe that one suspect was shot. No officers were injured in the incident.

Officers later searched the room at the resort the suspects were staying at and found guns, bullets, amphetamine, and methamphetamine. Police Forensic Science officers will revisit the place to gather DNA information.

CCTV in the area shows the suspects driving in Phatthalung headed toward Nakhon Sri Thammarat. The police are still searching for them and asked hospitals in the area to report if any patients are seeking treatment for a gunshot wound.

And that’s all for this report. I’ll be in the Thaiger studio on Monday for Thailand News Today. Meanwhile, you’re now up to date on the Thaiger.

Fundok
17 minutes ago, Vince said: Yes, but it is the fault of tourists if they break the law. Poor or inconsistent enforcement does not justify non-compliance. Strict enforcement seems to be coming, so maybe this is all moot. Yes, agreed. …

Stevejm
12 minutes ago, LoongFred said: If you only budgeted $1500 for your vacation you must be a begpacker or something equal. The added cost of covid testing is for you and others safety. If your worried about testing positive and…