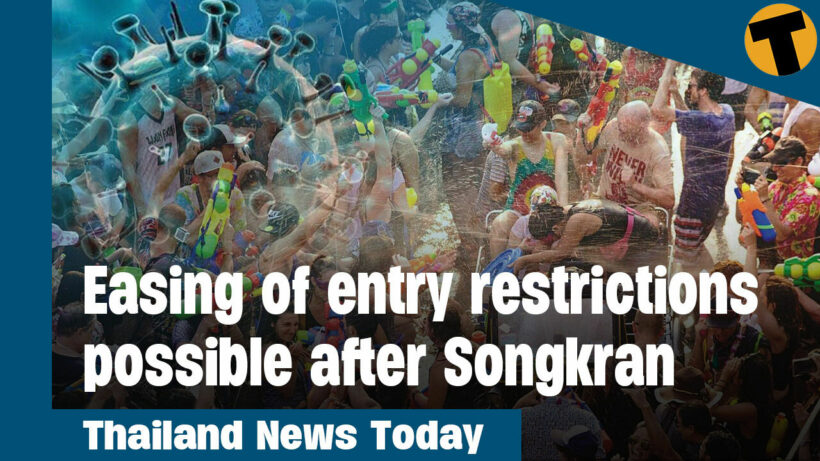 Thailand’s tourism minister says entry restrictions could be eased further IF there is no surge in Covid cases following next month’s Songkran holiday.

Phiphat Ratchakitprakarn says Test & Go and Thailand Pass could be scrapped from June 1, if there is no spike in Covid cases or deaths after the Thai New Year holiday.

Phiphat is anxious for the country to move forward with re-opening, saying it risks getting left behind as neighbouring countries lift their entry restrictions.

Addressing the Association of Thai Travel Agents at its annual general meeting yesterday, Phiphat stressed the need for the government to work with tourism operators to ease travel restrictions further and attract more overseas visitors.

With the requirement for a pre-departure PCR test dropped from April 1, Phiphat says restrictions are expected to be eased further from May 1, when the PCR test on arrival could be replaced by an antigen test. However, any easing of entry restrictions is contingent on the country’s caseload following the Songkran holidays.

According to the minister, the number of daily new cases in April, including those detected via antigen tests, should not exceed 60,000 while Covid-related deaths should remain below 100. At this point, the tourism ministry would submit a proposal to the CCSA in May, to cancel Test & Go and the Thailand Pass from June 1.

The former suspects allegedly hired someone to bomb several spots including Lumpini Park, Chatuchak MRT station, and the Criminal Court – where they were just acquitted, ironically. According to prosecutors, the person they allegedly hired did not go through with the attacks.

The Thai government has approved a budget of 3 billion baht to subsidise the price of electric vehicles and has installed free-to-use EV charging stations at a major park in Bangkok to promote the shift to a low carbon economy.

The spokesperson for the prime minister, Thanakorn Wangboonkongchana, announced today that the premier aims to promote electric vehicles and make Thailand a centre of production for electric cars and motorcycles in the ASEAN region.

The government’s Excise Department has prepared an initial budget of 3 billion baht to discount electric vehicles for the public by 70,000 to 150,000 baht and is prepared to expand the budget if demand increases.

Two car markers, Great Wall Motor and MG Camp have agreed to participate in the project and have a total of 2,000 EVs for sale at a price approved by the Excise Department. Mercedez, BMW, Honda, Mitsubishi, Nissan, Foxconn, and Neta are also showing interest in joining the project. PM Prayut is confident that excise tax reductions will increase investment in electric vehicles.

Surveys conducted by a team appointed by Prayut found that a large number of people are interested in automotive innovations, especially for electric vehicles.

The BMA plans to install charging stations at parking lots in 10 more public parks and at some government organisations. The goal is to expand the development of public EV charging stations to promote conversion to electric vehicles.

People with EVs can book a slot to charge their vehicle in advance via a mobile app called MEA EV, available to download for free on IOS and Android.

Tourism firms in Betong are trying to strike a deal with Nok Air in order to get commercial flights operating again at the southern town’s airport.

Just 24 hours after the launch ceremony that was attended by the Prime Minister, Nok Air decided to suspend flights between Bangkok and Betong, citing a lack of passenger interest.

In response, businesses have offered to guarantee 60 seats on every Nok Air flight to Betong if the airline drops the cost of a round-trip ticket.

Nok Air’s round-trip fare between Bangkok and Betong is usually around 7,000 baht. The carrier has agreed to reduce this to 6,000 baht, but the Betong Tourism Association is pushing for a further reduction to 5,000 baht.

The association’s vice-president says if the TAT manages to agree on a deal with Nok Air, flights could resume on May 2.

In related news, the Bangkok Post reports that deputy PM Prawit Wongsuwon has dismissed concerns about possible problems with the airport’s commercial operations. This followed reports that the Southern Border Provinces Administrative Centre had requested additional funds to assist with running the airport. Prawit chairs a panel on the development of the southern border provinces and insists Betong Airport is operational.

Prawit has also insisted the sacking of the airport’s acting director won’t have any impact on the facility’s operations.

Chiang Mai tourism operators are offering gift vouchers to anyone who can provide information that leads to the arrest of people spreading news about the city’s Covid situation.

Concerned that such accounts could jeopardise Songkran tourism in the northern city, businesses have come together to offer vouchers worth up to 50,000 baht.

According to a Nation Thailand report, tourism operators are angry about a social media post that claims “every square inch of Chiang Mai is under the risk of Covid”. After a 2-year struggle during the pandemic, businesses are determined to put an end to anything that could scare away potential visitors over the Songkran holiday.

So if you’d like to snitch on your neighbour for a shiny voucher, the association says you can call 084-374-3310 or the Cyber Crime Investigation Bureau via its 1441 hotline.

A petrol station attendant in Bangkok had to get his leg amputated after a car slammed into him and another car while he was filling up the gas.

The driver, who had little experience behind the wheel, lost control of her new car, crashing into another car and the attendant. She had just bought the car that day.

The owner of the car that got hit shared pictures of the accident on her Facebook account which showed the grey-blue car smashed up against her white car at the petrol station in Bangkok’s Bang Khun Tien district. A large stain of blood was on the ground. She wrote…

“Parking to fill up the gas. Where did this car come from? Absolutely unlucky. I Feel sorry for the staff member who lost his leg”.

Why you should spend your Songkran in Chiang Mai 2022