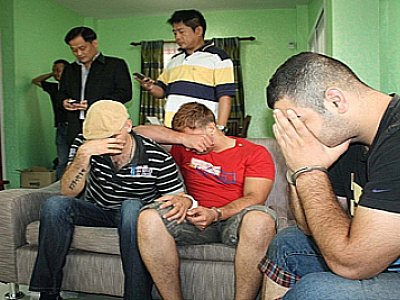 For months, senior detectives from the Banglamung police serious crime division, in a combined operation involving Thailand’s Narcotics Suppression Bureau, had been tracking one of the most prolific drug producing operations in the the nation.

Over a period of months, detectives pieced together the operation and knew that the major players were of Iranian nationality, living in Thailand. The difficult task was to trace them, since they operated under a cloak of anonymity.

The breakthrough came when officers arrested minor dealers who offered up their suppliers to gain favor in their sentencing. Those dealers, in turn arrested, supplied police with a traceable middle man and so the trail began.

The arrest of an Iranian middleman on the November 25 and his subsequent questioning by the team, resulted in a list of the top dogs, along with addresses where the drugs were manufactured and stored. The middleman had been delivering drugs to Bangkok at the time of his arrest in the Lat Krabang area of the capital Bangkok.

In the early hours of yesterday morning, two police teams were finally allowed to raid the Pattaya addresses, as warrants were issued for what was expected to become major drug raids. Prior to the raid, undercover officers had monitored the house to assess the activity and also to make sure that the operatives were at the address when the raid took place.

The first address to be raided was in Green village Park, on Soi Chayababruk in Pattaya, where the owner had already been questioned and officers knew that several Iranians had rented the secluded house, situated within a 40 Rai estate, for 25,000 baht a month.

Officers gained entry during a dawn raid and discovered nearly 19 Kilograms of ya bah and ya ice (methamphetamine), which had been freshly manufactured, along with the chemicals used to manufacture the drug and dilute it to its normal street strength. The upstairs of the house had been converted into a drug factory and the raw chemicals were found along side drug manufacturing equipment.

Two Iranian nationals, Ali Behnam Asadollahi and Mohammad Mehdi Manaei along with Behtd Gharhyoz were arrested at the scene and taken, along with the substances found, under the strong guard of Pattaya based police, to the Banglamung Regional Police station for further enquiries.

During a 12 month investigation, drug enforcement officers established that one of the manufacturing kingpins was, in fact Ali Behnam Asadollahi, a fully trained chemist and that the drugs were manufactured in the Chonburi province, for sale within Thailand. A large percentage of the product was also exported overseas and, as we shall see, some of the main ingredients were imported illegally from the Republic of Ireland.

Following the morning raid on the house, officers quickly established that more than one address had been used by the dealers, and around midday, a police team was sent to a warehouse on the east-side of Pattaya, rented to a company calling themselves AEE Hardware.

At the scene they met with the 57-year-old warehouse security guard along with the property owner. Once access was gained to the store, police found a supply of air compressors and soft furnishing which appeared to be a furniture factory, however they also found numerous ceramic containers, each of which contained a white, so far unidentified, powder, along with more chemicals used in the manufacturing of methamphetamines.

In a weird twist, the warehouse owner told police that the current tenant was a 41-year-old “Northern Irishman”, who was identified as “Manocheher Eskandari” who paid 15,000 baht a month to rent the premises. There is an obvious doubt as to his nationality and police have contacted British authorities to try and secure information of his whereabouts and history.

The security guard told officials that the warehouse had numerous foreign visitors, but that he assumed that they were conducting legitimate business transactions.

A total of 4 men have so far been arrested, but police are aware of at least 8 being involved in the gang. Its believed that the escapees may have fled toward the Burmese border in the hope that they can escape arrest, however Pattaya Police have liaised with Thailand’s immigration police and an “all persons bulletin” has been released to border guards with a detailed description.

Currently the team believe that the escapees are still within Thailand’s borders and are desperate men, determined to escape.

The combined value of the raid is conservatively estimated at over three hundred million baht (US$10 million).

Thailand has seen a massive effort being made over recent years to reduce the drug trade, both for export and domestic use and police have arrested anyone who can be associated with the trade, from the minor street dealer to the king pins.

With the penalties for illicit drug trading as high as they are in the kingdom, ( life imprisonment and even the death penalty are common), those involved are usually quick to assist the authorities in the hope that their sentences might be lessened.

Pattaya Police, along with those from the Banglamung region, have worked tirelessly on cases such as these, starting with the one- and two-pill dealers and working up the chain of supply.