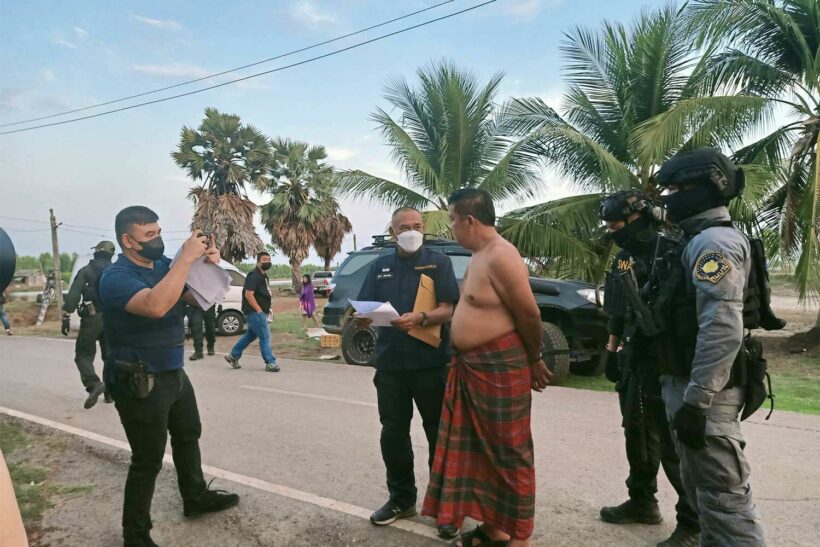 Standing shirtless in the sun on the roadside, a local man in Nakhom Nayok had a rude awakening this morning when police arrested him as a key suspect in the murder of two men and the wounding of another earlier this month.

The man was arrested this morning when around 300 local and provincial officers searched the Bang Somboon area in a strategic operation.

Armed with an arrest warrant, police detained Thawatchai Sricharn, 48, at a house in tambon Sri Chula of Muang district in Nakhom Nayok — about 120 kilometres northeast of Bangkok.

Sricharn reportedly admitted he was the man named in an arrest warrant, but denied any involvement in the attack. He is being held at Dong Lakhon police station in Nakon Nayok to undergo further questioning.

He claimed the he and another suspect were eating pork barbecue together at the time of the shooting, the Bangkok Post reported. He claimed that he event visited the scene of the crime for himself after hearing about the attack.

Police obtained court warrants on Monday for the arrest of three men on charges of murder, attempted murder and illegal possession of weapons, as well as for firing them in a public area. They are suspected in the February 14 attack on three victims as they rode in a van at night.

Somchai Muang-kard, 63, was shot in the chest and left leg. He was the deputy chairman of Bang Somboon tambon administration organisation (TAO). The driver, Watchara Nutdaeng, 52, was shot in the torso and legs.

Bullets also struck TAO chairman Yannakorn Thorprayoon, 44, in the left shoulder and left leg, but we was rushed to the hospital in time, surviving the attack.

Their van was attacked on Pak Thortoey Noi Road in tambon Srijula of Muang district at around 9pm on February 14, when the gunmen pulled up alongside them in a vehicle and opened fire, the Bangkok Post reported.

Police have named the other two suspects, who are still at large:

mediagator
300 officers for 1 guy. Thai efficiency.
HiuMak
How many hands to change a light bulb