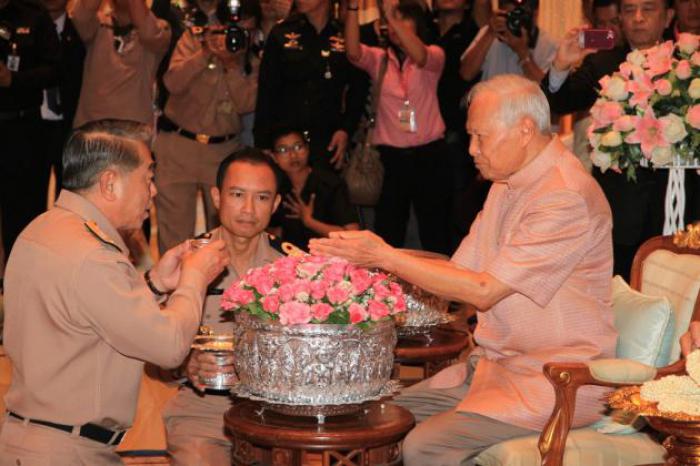 PHUKET: Caretaker Prime Minister and Defence Minister Yingluck Shinawatra was absent yesterday from a gathering to pay their respects to Privy Council President General Prem Tinsulanonda, leaving only commanders of the Armed Forces with him.

Deputy Defence Minister Yuthasak Sasiprapha was also present at the event, as president of the National Olympic Committee of Thailand.

Prem thanked the commanders for their gestures although the former commander retired from the Army more than three decades ago.

“It is good to see all three of the Armed Forces’ commanders and police chief come to me every year. This shows we all have friendship and I have the Armed Forces as good friends,” he said. “I feel comfortable to see the unity among us.

“If we unite, the country will be secure. The Armed Forces would have power over those who have bad plans to hurt our nation,” Prem said.

“As His Majesty the King said many times, we have to perform our duty with honour. We also have to look at our people to have them perform their duties honestly. “General Tanasak plus the military and police commanders have many hard tasks to achieve these days. If we unite and do our jobs and have our men to do their jobs as well, people can rely on us, so that people will love, respect and trust the military and police,” Prem said.

Meeting with the top adviser to His Majesty the King is interpreted as a political signal to show that General Prem retains high influence over the Armed Forces. Prem’s support for any groups would be significant for political developments in the Kingdom.

At an Army event on Thursday, Prem said he would not be able to mediate negotiations between Yingluck and Suthep Thaugsuban, leader of the anti-government People’s Democratic Reform Committee. Prem said the two sides would not listen to him.

Usually the defence minister leads the commanders to pay respect to Prem to show that the government has good ties to him. Yingluck currently holds the Defence portfolio.

She did not respond when she was asked on Thursday if she would lead commanders to see Prem at Songkran. The caretaker prime minister faces many political and legal challenges because of the prolonged anti-government protests concentrated in Bangkok and will spend her time over the holiday break quietly in Chiang Mai, her home province. She may not appear to celebrate the festival in public as usual this year, a source said.

Meeting with Prem requires a formal letter for an appointment in advance, of at least three days up to a week, the source said.

However, the Privy Council chief did not say anything about the absence of the prime minister, according to the source close to the meeting yesterday, who suggested the gathering had no political agenda.

In 2012, Yingluck visited Prem on the occasion of Songkran. Last year Prem did not open his home for such greetings.

During the New Year, Yingluck led the military top brass to greet Prem for that occasion. Earlier, in August, Yingluck greeted Prem on his 94th birthday.

Separately, at the Royal Thai Army headquarters, Prayuth said he hoped the political situation would get better after the traditional Songkran events, which let people make merit and pay respect to their seniors. But he said all sides of society should join together to help restore peace and order for the country.

Nevertheless, he vowed not to allow violence, which some expect amid rising political tension after Songkran.

Public health permanent secretary Dr Narong Sahametapat and his deputy Dr Wachira Pengjuntr welcomed PDRC leader Suthep Thaugsuban and thousands of anti-government protesters who visited the ministry to ask officials to side with them.

Suthep gave a gold whistle to Narong, who said he accepted the whistle on behalf of officials in the entire ministry. Other groups of senior medical workers – such as the ministry’s former permanent secretary Dr Paichit Warachit, the Medical Council’s president Somsak Lohlekha, Thailand Nursing and Midwifery Council’s president Krissada Sawaengdee – and hundreds of health volunteers welcomed Suthep.

Narong said he had proposed a blueprint to reform the country’s public health system to the PDRC and he understood the committee was worried about the health issue.

He said he and the PDRC had the same idea to strengthen the country’s public health system and needed a mechanism to check and balance power.

The Centre for the Administration of Peace and Order (CAPO) has issued a warning to state officials and civil servants not to support or join the PDRC’s demonstration. Narong said when asked to explain to the CAPO about his political stance, he insisted he had done nothing wrong.

Paichit said he was not worried about the current situation at the ministry, adding that officials must be the main pillar in resolving the country’s crisis.

“Reformation must come from the participation of all people,” he said.

Meanwhile, Suthep said both PDRC and Public Health officials have the same ideas about a fight to improve the country. It was not a fight for a political party but for a country and benefit of the people.

“This was the first time PDRC and top officials of the Public Health Ministry had officially met each other. We will take the ministry’s blueprint to resolve the country’s crisis,” Suthep told his supporters at the ministry.

Meanwhile, outgoing National Security Council secretary general Paradorn Pattanatabutr said the authorities would not allow a situation like this – in which Suthep and other PDRC leaders visit bureaucrats at different ministries – to continue any longer.

“We can’t allow this to go on any more. This is political psychology. If we allow this to continue, it will bring negative developments for the government,” Paradorn said.

He said some permanent secretaries that Suthep visited even invited the PDRC leader into their offices.