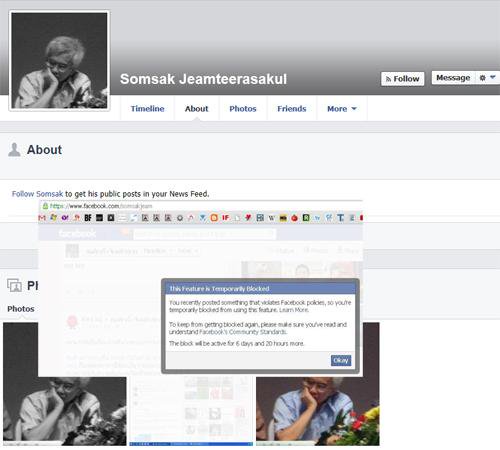 Facebook user Phakjira Slk, claiming to have been asked by Somsak, posted a message on the academic’s page saying the account had been suspended on Wednesday morning because he allegedly criticised Prime Minister Yingluck Shinawatra for suing Thai Rath cartoonist Chai Rachawat.

“I want to confirm that I am against Yingluck for filing the lawsuit against Chai Rachawat. This lawsuit is in contradiction to the spirit of democracy,” is the message Somsak posted on his page. He also said that the libel lawsuit was a waste of public money.

Many of his supporters spread the message widely on social media, though some said they were glad his access to Facebook had been blocked.

In the message via Phakjira Slk, Somsak said his account had been suspended because somebody had reported him as having violated Facebook’s terms and conditions, adding that he was afraid he would be framed again if he were to register for a new page.

Meanwhile, the cartoonist has not responded to police summonses after Yingluck sued him for libel, deputy director of the Metropolitan Police Bureau Maj-General Anuchai Lekbamrung said yesterday.

Anuchai said the Metropolitan Investigation Committee had issued a summonses on Wednesday for Somchai Katanyutanan, or Chai Rachawat, to report on June 5 for further questioning and acknowledging the allegations.

The allegations of insulting government official on duty, commercial libel and violation of the Computer Act compel the cartoonist to report to the investigation committee. If he fails to show up on two occasions, the committee will be forced to seek an arrest warrant for him.


Human rights agency raises concerns
The Nation / Phuket Gazette
PHUKET: Millions of refugees and migrants have ended up as forced labour because many countries do not give them legal protection, Amnesty International said.

In its 2013 report, the agency raised concerns about many human-rights issues, some of which are related to Thailand.

The report pointed out that asylum-seekers in Thailand continued to face the risk of arrest and detention as well as forced return to their country, where they are at the risk of persecution.

Following discussions with the Myanmar government, Thailand’s National Security Council indicated that the 146,900 Myanmar refugees in Thailand could return home within a year, despite reports of continued instability in ethnic areas and the lack of protection to facilitate a safe return. Documented and undocumented migrant workers were also threatened with deportation in December for failure to complete the national verification process.

Parinya Boonridrerthaikul, Amnesty International Thailand’s executive director, also lamented the ongoing unrest in the deep South where civilians are at constant risk. Teachers, viewed as symbols of the state, have been targeted, resulting in school closures during the latter part of 2012.

Amnesty International also slammed the use of the emergency decree in the South, saying it allowed immunity to officials who might have committed human-rights violations such as torture. According to the agency, insurgency leaders have accused security forces of extrajudicial executions in Yala. On the freedom of expression, the agency said citizens’ freedom of expression continue to be curtailed, primarily through the lese majeste law and the 2007 Computer Crimes Act.

“The end of good governance practised at the GPO is next, before a possible privatisation,” he added.

Citing an interview by the unnamed head of a network of the state-enterprise unions, Wichai said Public Health Minister Pradit Sinthawan-arong once asked this person: “If I want to privatise GPO, would you oppose it?”

The GPO’s principle function – serving the public as the state’s pharmaceutical producer – would be dropped and replaced by a profit-driven agenda, after privatisation.

“A privatised GPO would no longer be able to produce cheap medicines for public use, but would pave the way for foreign firms to produce medicines at a much higher cost,” he said.

Citing his five-year tenure as head of the GPO board, Wichai said the organisation should remain a state enterprise. He defended his own decision to dismiss a former GPO chief, Dr Mongkhol Jiwasantikarn, saying the process was transparent and the factors prompting Mongkhol’s removal were fair and based on legal criteria.

“Political influence on state agencies and officials today is so powerful that it causes senior officials to lie. That way they feel they are not forced to make decisions,” he said.

Meanwhile, head of the Rural Doctors Society, Dr Kriengsak Vacharanukulkieti, denied that the society was behind a rally planned by kidney patients demanding the dismissal of Pradit. A large group of protesters are planning to rally outside PM Yingluck Shinawatra’s home next week to protest against the government’s planned co-payment scheme.