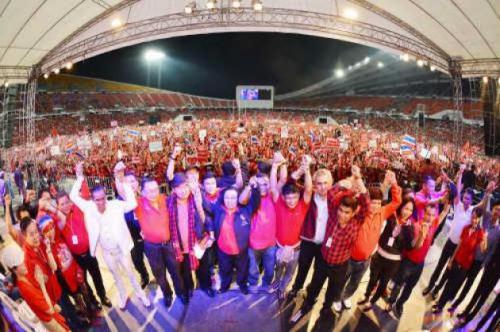 
Huge marches to gridlock Bangkok
The Nation / Phuket Gazette
PHUKET: Bangkok faces paralysis today as huge crowds of anti-government protesters set out on symbolic marches across the capital in a move that protest leaders are calling an attempt to overthrow the so-called “Thaksin Shinawatra regime”.

The enormous crowd that packed Democracy Monument and nearby areas yesterday looks set to enable the Democrat Party and its allies, which are leading the joint protests, to come up with various measures today – starting at 8.30am – to put pressure on the Pheu Thai-led coalition government. Their aim is initially to shut down, and eventually end, the so-called Thaksin regime.

The protesters yesterday crowded on to inner Rajdamnoen Avenue, spilling over into adjacent areas and blocking major roads, including Lan Luang Road, the Nang Lerng area and Khok Wua Intersection. Even Sanam Luang and nearby Pin Klao Bridge saw large numbers of protesters.

Two key groups of anti-government protesters are expected to move across the capital today. One group will march to block access to Government House and Parliament, while the other will pressure government agencies, a high-ranking protest source said yesterday.

The Students and People’s Network for Thailand’s Reform (STR) and the People’s Army to Overthrow the Thaksin Regime – known for their hardline stances – will lead protesters to converge at eight key locations in central areas. At the same time, former Democrat MP Suthep Thaugsuban will lead a second group of marchers to 12 other locations – including the government civil-service complex on Chaeng Watthana Road – to call on officials to engage in acts of civil disobedience.

The Suthep-led march will no doubt cause temporary traffic congestion today. However, the blockade of Government House and Parliament are likely to have longer-lasting effects, as the Democrat-led protesters will attempt to prevent the no-confidence debate, which begins tomorrow, the source said.

Political deadlock is expected to hit the Yingluck government if the Parliament is blockaded; such an action would render the announcement of a last-resort House dissolution impossible. The Constitution bars a government from dissolving the House once a no-confidence motion has been accepted, pending a debate.

The centre has recommended protection of strategic locations, at the highest level, to deter any attempts to blockade them, but it is doubtful whether police would be able to stop crowds, which outnumber them, from doing so. The strategic sites include Government House and both airports. Prime Minister Yingluck Shinawatra reportedly told police that she wanted to hold the Cabinet meeting at Government House, as no alternative locations had been found.

Estimates of the number of protesters yesterday varied, with security sources citing a figure of around 100,000 and a spokesman for the Democracy Monument rally putting the number at 440,000 in the late afternoon with more expected in the evening.

Protesters who travelled to Bangkok from the provinces yesterday were camped out last night along Rajdamnoen Avenue under large tents. The crowds, which have also spilled over onto Pin Klao Bridge, are also blocking many connecting roads on both the Bangkok and Thon Buri sides of the river, causing severe gridlock.

The pro-Thaksin red-shirts gathered yesterday at Rajamangala Stadium in the Hua Mak area – a considerable distance from the anti-government protests – with the rally scheduled to start at 6pm. As of 8.30pm, red-shirt leaders claimed 60,000 people had converged there.

However, they said the situation would be evaluated on a daily basis – citing concerns about government stability as the reason.

In addition to Bangkok residents, the red-shirt movement is made up of a number of factions from the provinces, including Nong Khai, Udon Thani, Chon Buri, Rayong and Nakhon Ratchasima.

War rooms set up at the Supreme Command are monitoring the protests on Rajdamnoen Avenue around the clock, a military source said.

The source said military leaders feared that the protests would escalate out of control because the number of people gathered was so large. Suthep might be unable to control the situation, the source, said, citing a concern reportedly expressed by Yingluck.


Pheu Thai MPs to convene today
The Nation / Phuket Gazette
PHUKET: As pro- and anti-government protesters from the provinces descend on Bangkok, Pheu Thai Party spokesman Prompong Nopparit said all party MPs would convene today to prepare for the no-confidence debate, scheduled for tomorrow and Wednesday.

Pheu Thai Party MPs have already been told to closely monitor the political situation until the end of this month, he added.

Despite a decision by three anti-government groups to join forces in a bid to topple the government, Prompong said the administration had no intention of calling for a House dissolution.

Prompong said that former Democrat MP Suthep Thaugsuban would likely lead supporters to Parliament and to Government House tomorrow, in an attempt to block the no-confidence vote, in an effort to create a political deadlock.

He said the Democrats might also try to pressure the National Anti-Corruption Commission (NACC) into making a quick decision on impeaching the 312 MPs who endorsed the charter amendment on senator selection, and call for the House to reconvene when only Democrats and Bhum Jai Thai MPs remained.

They could then vote against Prime Minister Yingluck Shinawatra and vote to appoint Democrat Party leader Abhisit Vejjajiva as prime minister.

“Is this actually the plan?” Prompong demanded to know – directing his question at Suthep and Abhisit.

He warned that 15 million voters who support the Pheu Thai Party would not remain idle if this were true.

Prompong will visit the NACC today in an attempt to urge the commission to carry out a fair investigation into the 312 MPs.

The investigation follows the Constitutional Court’s ruling earlier this week that the amendment was unconstitutional. Pheu Thai is still questioning the court’s authority in reviewing the case.

Meanwhile, anti-government groups are ramping up plans to bring Bangkok to a standstill today.

While supporters stream in from the provinces – including some 2,000 from Chon Buri and more from Nakhon Ratchasima – pro-government groups are also mobilising support.

Over 10,000 are expected from provinces in the North – a major stronghold of Pheu Thai Party.


Two die in South flash floods
The Nation / Phuket Gazette
PHUKET: An 8-year-old boy who was seen being washed away in a flash flood from a train station in Surat Thani’s Tha Chana district on Saturday afternoon was found dead yesterday morning. His body was located 100 metres downstream.

He was the first casualty of the current flooding in the South.