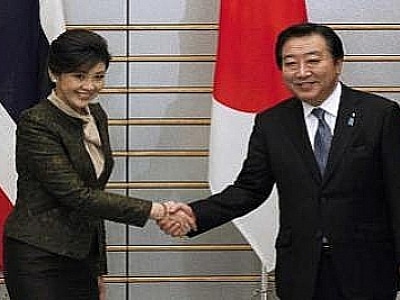 Pheu Thai, Democrats take different paths in wooing women voters
PHUKET (The Nation): Both parties cite the importance of women, their roles in taking care of families and their forming a key part of the workforce.

As the world celebrates International Women’s Day today, the two parties’ attempts to woo them come in markedly different forms, with one providing loans for women to invest, and the other offering solutions as to how they can rid themselves of existing debts.

The first objective of the Yingluck Shinawatra government’s Women Empowerment Fund scheme is to provide a lending resource at zero or low interest.

Under the scheme, a group of women can propose a project to their local funding committee with a view to receiving a loan.

The other objectives include funding job training and a network for women’s protection, as well as “promotion of understanding of women in all aspects.”

About 100 million baht has been allocated under the scheme for each province. Yingluck said during her recent visit to Udon Thani that it would be the first province where the project would be launched.

The idea is that people can get out of poverty if they have some capital to start up a business. They might be in debt initially, but the money provides them with the opportunity for advancement.

Although more than 4 million people have reportedly registered under the scheme, the Four Region Women network recently submitted proposals to the government asking for cancellation of the registration process, which is open until the end of this month, saying that all women should be eligible to join automatically.

The network also requested transparency and said government officials must stay away from the fund’s management. Under current rules, the fund will be managed by an elected committee.

As for the Democrats’ approach to help the female population rise out of indebtedness, MP Rachada Dhnadirek said: “We are not providing money. We provide education and moral support, as we believe these two things will salvage women out of debts.”

She said that merely lending money would not really solve the problem, as the cycle of indebtedness could then return at any time.

Providing moral support, she added, was also very important. Some people, who are not in debt due to investment, might not be able to overcome their vices, such as the perceived need for luxuries.

Democrat MPs during the past weekend held a workshop titled “Women Beat Debts”, at which 60 women with debt problems shared their experiences, learned about basic financial management, and were given advice on what they had to do to get out of debt.

Speakers and advisers of the Democrat Party’s programme gave advice to all of the participating women on a case-by-case basis.

Rachada is one the Democrat MPs who had run such a project in their constituencies for more than a year before the programme was upgraded to become an official party scheme.

Democrat MP Jermmas Chuenglertsiri said more than 150 people had told her they wanted to take part in the next programme that accepts only about 50 participants each time.

Many of them mistakenly thought that the Democrats would provide direct financial assistance, whereas the focus is on moral support and education.

Considering that women outnumber men by 32 million to 31 million in the Kingdom, it is a good sign that political parties are attaching more importance to them. But eventually, female voters will decide which of the parties’ policies they prefer.

PHUKET (The Nation): Getting on for 20 years, the public had been largely trying to ignore the controversial abandoned project between Hopewell (Thailand), which is a subsidiary of Hong Kong based Hopewell Holdings, and the State Railway of Thailand (SRT) – that is, until the collapse of part of the construction last Thursday.

The incident involving a collapsed platform section has brought to the surface four key issues.

First, Hopewell (Thailand)’s demand for compensation of 12 billion baht for unfair trade practice after the SRT cancelled the contract, leaving the project partially constructed. The amount claimed is not only to compensate for the partial construction, but also because the government now plans to use the construction to proceed with the Red Line commuter train project.

Second, the SRT in turn is seeking Bt200 billion in compensation from Hopewell in return for business opportunity losses from land development along the 26-kilometre Bang Sue-Rangsit route, as well as benefit-sharing from the project.

Third, there are the SRT’s costs in having to pay a surcharge to the Japan International Cooperation Agency (Jica) after missing loan repayment as scheduled under the contract. So far, the agency has had to pay a surcharge of Bt33 million.

Finally, the pending ruling will delay Red Line route construction, as Hopewell and the SRT have not been able to reach a compromise.

In particular, the prolonged wait for the appeal court ruling has undermined foreign investor confidence as regards the operation of government megaprojects. Investors could now be reluctant to join hands with the government, or they would have to add the risk cost into such projects.

From the Hopewell side, however, now is a good time to attract more attention to the drawnout case, as the group needs to achieve compensation for its business loss in Thailand.

On the other hand, the SRT wants to end the case without having to make any payment, arguing that it was Hopewell that had breached the agreement. This would allow the agency to proceed with the Red Line commuter rail route, which is now behind schedule as construction was due to begin last year.

Red Line construction is scheduled for completion by 2016 at an investment of Bt75.54 billion.

The SRT inked the Bt63.87billion loan agreement with Jica in March, 2009. It had to repay the first instalment of the loan last year, but this was delayed due to the problems surrounding the project.

In 2008, an arbitrator ruled in favour of Hopewell, ordering the SRT to pay Bt12 billion in compensation. Of the total, Bt9 billion is to compensate for the construction cost, Bt2.85 billion for land utilisation, Bt38.7 million for the cost of the bank guarantee issued at a 7.5-percent interest rate, and Bt500 million for the guarantee itself.

However, the SRT petitioned the Office of the Attorney General to forward the case to the Administrative Court, seeking that the court nullify the arbitrator’s ruling.

The case is still pending a final ruling by the Administrative Court, besides which the SRT also wants a decision on compensation of Bt200 billion from Hopewell for business opportunity losses.