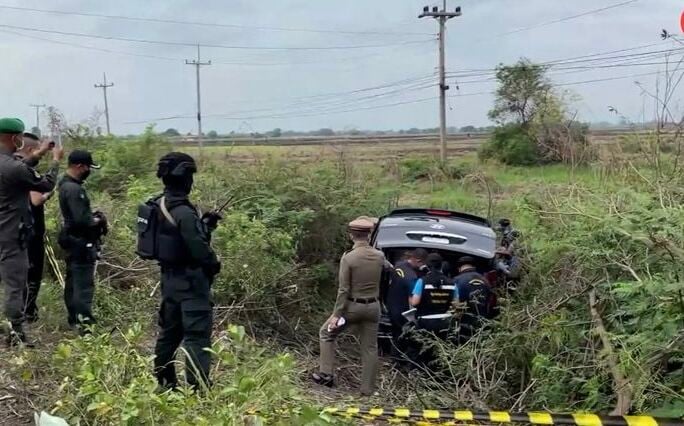 More than 100 law enforcement officers have been assigned to investigate a case where gunmen attacked a van carrying members of a tambon administrative organisation, or TAO, on Valentine’s Day in the central province Nakhon Nayok. A politician of the tambon, or subdistrict, and the driver were killed in the shooting. A TAO chairperson was injured.

In an order by national police chief Suwat Jangyodsuk, the case has been moved from the local police to the national Crime Suppression Division. The Royal Thai Police say more than 100 officers are working on the case due to the influential people involved and some have been concerned that “local mafias” could manipulate the investigation outcome.

From video footage from the van, a Mitsubishi tailgated the van and then pulled up alongside it when gunmen opened fire. The driver lost control, crashing into a ditch. So far, officers have arrested three suspects, including a man who allegedly supplied the firearms to the gunmen, but believe more people were involved in the plans for the attack.

Officers suspect the shooting was politically motivated. The local elections had been on hold for seven years following the 2014 military coup. But with the polls opening up last year and new leaders elected, it caused conflict.

AdvocatusDiaboli
2 hours ago, Thaiger said: The Royal Thai Police say more than 100 officers are working on the case due to the influential people involved In other words …. They have been told … “Do Your Job” ….

palooka
The local elections had been on hold for seven years following the 2014 military coup. But with the polls opening up last year and new leaders elected, it caused conflict. Sure would if those elected don't follow Pnuts line of…

UPDATE: What really happened to Tangmo? All we know (and the stuff we don’t)