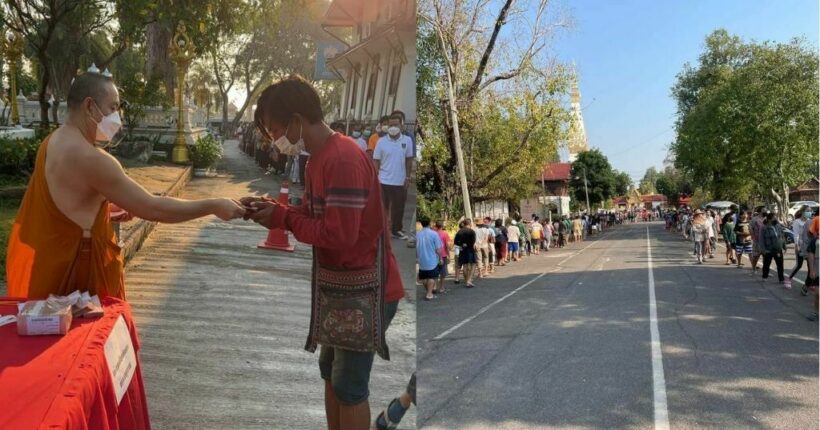 A monk won the top Thai government lottery prize of 18 million baht and is now giving the money away to locals, other temples, and various organisations. The monk in the northern province Nakhon Phanom says he doesn’t usually buy lottery tickets as monks shouldn’t join any kinds of gambling, but says he recently bought a ticket to help a local seller who was struggling financially during the pandemic.

The 47 year old monk from the well-known Wat Phra That Phanom Woramahawihan says he believes that the money he won belongs to the angels and he didn’t want to keep it for himself. He decided to share the money with others to spread propitiousness and luck.

He gave many of the locals in the province around 200 baht each. Reports say more than 1,000 locals visited the temple for money from the monk. So many people have come by, that provincial officers are now monitoring the crowds to prevent the spread of Covid-19. He’s given away a total of 1.5 million baht to locals in the area so far.

The monk also offered 4 million baht to the temple where he lives, schools, different state and private organisations in the area. He said he would give all of the money to charities and temples.

The monk told Thai media that angels blessed him because he has been taking care of the temple and Phra That Phanom for over 10 years. He said he brought three lottery tickets with number 061905 three days before the bi-monthly lottery draw. The seller asked him to help buy lottery tickets, and the monk says he saw it was another way to help people and make merit.

Following the monk’s lottery win, some have questioned the ethics and rules of Buddhist monkhood. Thai media reported an interview with a monk saying that it was wrong and inappropriate for monks to buy lottery tickets. However, news about monks winning lotteries is still reported in Thai media from time to time.

In November 2020, a Thai monk won 18 million baht in the lottery, but ended up leaving the temple and going into hiding because so many people came by asking for money from the monk after hearing that he’d been donating his winnings. The crowds disturbed the monks, and even made it hard for them to sleep. The monk then left to live at another temple at an undisclosed location.

palooka
Have a local temple that was totally built by one monk with his lifetime earnings, many monks visit but no one has stayed a long time. He sorts them out pretty quickly. Sadly age is overtaking him, mid eighties and…

Soidog
We will add lying to the list of misdemeanours then shall we.

Noble_Design
43 minutes ago, Fluke said: "The seller asked him to help buy lottery tickets, and the monk says he saw it was another way to help people and make merit." I have a feeling that it didn't quite happen like…
Cathat
Thought men of the orange cloth were not supposed to handle money and trusted lay people were supposed to deal with the cash handling side of things. he appears to be personally handing out the free dosh in the pictures…
HiuMak
13 hours ago, Thaiger said: A monk won the top Thai government lottery prize of 18 million baht and is now giving the money away to locals, other temples, and various organisations. The monk in the northern province Nakhon Phanom…

Event Announcement: Sustainable solutions for Southeast Asia’s recovery to be held on 16-17 March