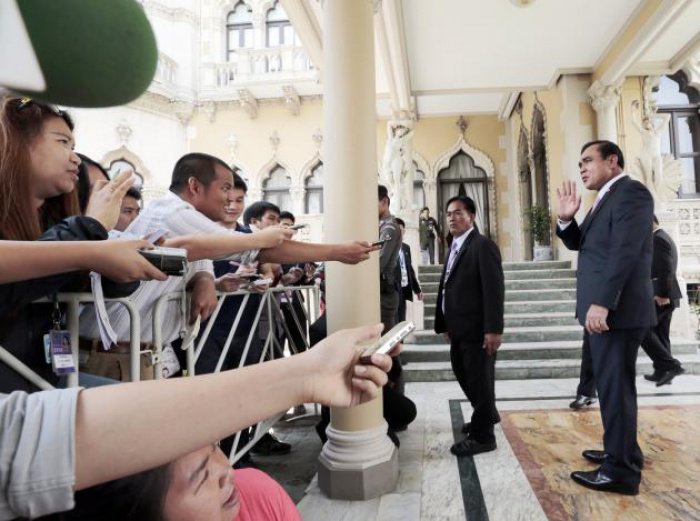 While international right groups slammed the plan to enforce Article 44 of the interim charter that gives the junta leader unlimited power in place of martial law, government officials jumped to its defence, claiming the versatile legal instrument that replaces martial law will be utilised to cope with several problems in the country.

He pointed to the failure of past civil administrations in addressing these problems, which had held back the country’s development. He said that since staging the coup on May 22 last year, he had wanted to solve these problems and he was aspiring for no personal gains.

The article comprises authority granted under the martial law, the emergency decree and the Internal Security Act to ensure maximum efficiency in enforcing the military government’s authority in dealing with the issue of lottery-ticket prices and civil-aviation regulations, apart from combating human trafficking in the fishery industry.

Although Article 44 does not yet have variable measures of its own, pending details to be worked out by the government’s legal adviser, it will yield outcomes similar to those imposed by the martial law, but will carry different penalties, said Panitan Wattanayagorn, an adviser to Deputy Prime Minister and Defence Minister Gen Prawit Wongsuwan.

Organic regulations will be issued after Article 44 becomes effective, once martial law has been revoked officially under a royal command, which will be published in the Royal Gazette.

“The security agencies have insisted that there is still need for a tool to deal with public gatherings to suppress violence after martial law is revoked, but Article 44 will be more open to allowing peaceful political activities and expression,” said Mr Panitan, who is also an academic at Chulalongkorn University. “Article 44 is expected to ease political tension both domestically and internationally.”

A high-ranking security source said the guidelines under martial law would be implemented to cope with political violence or disturbance, but their intensity would decrease and the measures partially enforced, not wholly as when martial law was imposed previously.

The organic regulations under Article 44 would contain details on certain actions by police and soldiers – what they would be allowed or not allowed to do, including clear-cut definitions of authority for them to conduct raids or make arrests. Certain regulations under the article will carry criminal penalties for wrongdoers, he added.

A military source said that as the chief of the NCPO, PM Prayut already had the power to override authority exercised by the judiciary, executive and legislative branches. Article 44 only legally endorses such power.

“He never exercised this power against groups of people whose activities had affected national security, but only used it carefully to amend necessary laws and execute his power as the prime minister,” the source said.

Meanwhile, Interior Minister Gen Anupong Paochinda urged the public to embrace the imposition of Article 44 in exchange for peace and order within the society.

“One of the most devastating setbacks to the country that happened in the recent past has been domestic conflict. I do not want the country to return to that situation. Therefore, some laws are needed for peace and order,” Gen Anupong said.

The interior minister, who is also a member of the NCPO, said: “I want the public to accept that peace and order may come with the cost of stricter law and law enforcement.”

Reacting to reports that the use of Article 44 may draw some international criticism and sanctions, Anupong said the international community was concerned about martial law, so that has been removed.

This will benefit the country, he said, but insisted that “normal” laws are sufficient to ensure the country’s security.