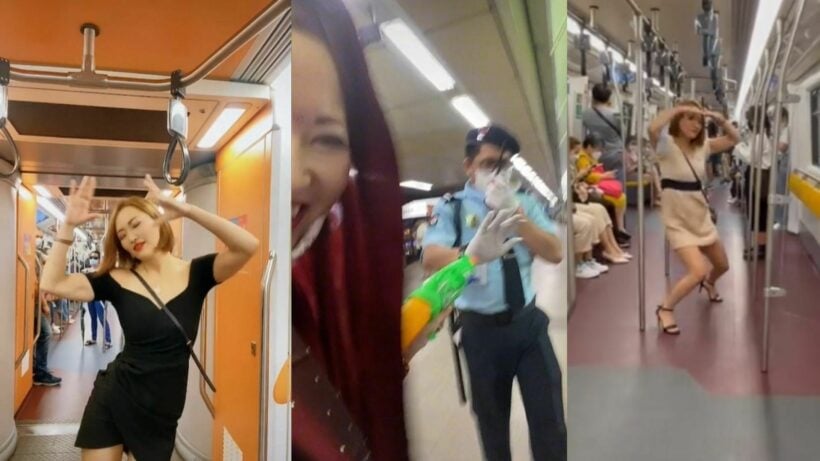 Photos of the Japanese woman dancing on the BTS in Bangkok.

A Japanese woman has caused a stir on Thai social media, after she posted TikTok videos under the username “Shizu0405fc3” of herself dancing without a face mask on, as well as spraying water at strangers and a security guard, while riding the BTS Skytrain in Bangkok.

Thai netizens were annoyed and angered by the woman’s seemingly random antics in the name of shameless self-promotion on social media. She has since publicly apologised for her actions on TikTok in a few languages, including Thai.

“I apologise for splashing water and not wearing a mask on the train.”

It all started on Friday when she used a water gun on a few passengers who were waiting for the train. Seconds later, a security guard approached her telling her to stop. But the woman continued spraying water with abandon and a big smile on her face, as if she were having the time of her life.

The following day, a local tweeted a short video clip of the same lady doing some crazy dancing to music blasting from a Bluetooth speaker on the train. She then struck again on Sunday, and you guessed it, it happened on the train… seemingly her favourite platform. But this time her goal was to protest wearing face masks.

“No more mask!” she said, twirling her white medical mask around her finger before flinging it to the ground. “Don’t you wanna take off your mask?” she asked, then broke into an awkward TikTok dance.

In the background, commuters stared at the woman in disbelief and annoyance.

Thaidup
7 hours ago, Poolie said: I would.................😃 You clicked on to the full story and saw the pics didn't ya🤩
Zorba_the_Geek
1 hour ago, piyanat said: How about 1 week jail and cash punishment??? .. apologies is not enough for this stupid!! Cope. Be thankful she's not apologising for tossing a smoke grenade and shooting bullets at passengers and security guards.…
Zorba_the_Geek
And another thing, or three: 1.Covid is here forever. 2.Most people recover. 3.Masks are redundant after vaccines. 4. No vaccine? Wear a mask like we all did when it began. Simple. I support her protest, it's all about control now,…
Fanta
Introducing a voice of reason
Sols
EXCUSE ME. i want to tell this but this wonan herself was saying she was zainichi korean, it is people who has korean citizenship And staying in japan with permanent viza and Zainichi Korean is always doing anti japan statement…