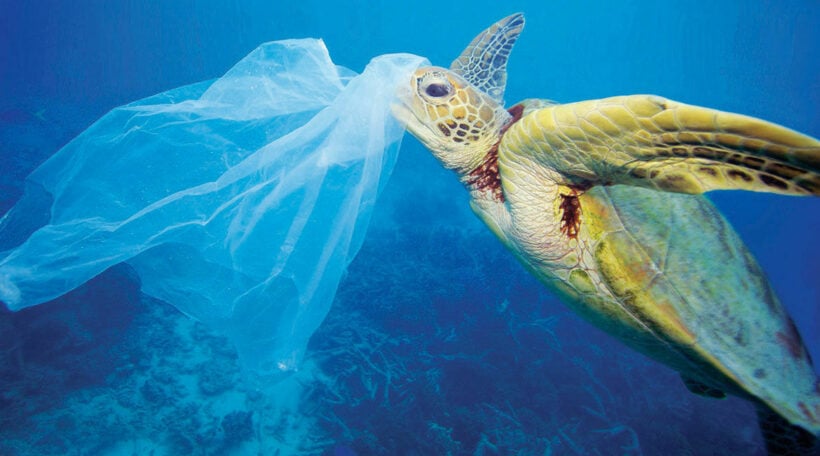 Thailand’s spot on the list of countries with the highest levels of marine plastic pollution is down from #6 to #10 in light of the country’s efforts to combat plastic waste. Thailand recently reached an international agreement to combat the looming problem of plastic waste at the UN’s most recent Environmental Assembly, or UNEA, meeting held in Nairobi, Kenya.

Thailand has established a panel to help draft international laws on plastic pollution and aims to completely stop the use of seven types of single-use plastic by 2027, replacing them with environmentally-friendly alternatives. Thailand’s Minister of Natural Resources and Environment Varawut Silapa-archa attended the 5th UNEA meeting and agreed for the country to join the global initiative called End Plastic Pollution: Towards an International Legally Binding Instrument.

Thailand has had a few false starts at limiting the use of plastic, especially single-use plastic bags, but the eager promotions and best intentions have mostly reverted to old ‘plastic’ habits and very little progress has been achieved.

By taking part in the initiative, Thailand made four international agreements…

The Permanent Secretary of Thailand’s Ministry of Foreign Affairs Jatuporn Burutphat participated in the UNEA meeting, which took place on February 28 – March 2 in Nairobi, and made the following comments…

“Thailand has achieved a satisfactory level of plastic waste management and has played a role in negotiating on the world stage. The tangible results are the establishment of an intergovernmental panel for negotiations which will meet in the first six months of 2022 to draft an international law on plastic pollution and marine waste management, with the goal of managing plastics throughout their lifecycle. This will lead countries to reduce the use of single-use plastics which are a long-standing environmental problem. The draft of the international law will be completed by 2024 and supported by 175 countries including Thailand.”

Thailand’s Ministry of Foreign Affairs says they are accelerating the actions to reduce plastic waste to benefit society and reduce global warming. However, unless Thailand acts fast, there will be an inevitable waste crisis.

“The Ministry of Foreign Affairs continues to solve the plastic waste problem since hosting the first marine debris conference in ASEAN in Bangkok in 2019 in which the Declaration of Combating Marine Debris in the ASEAN region was created.”

Joining global negotiations to reduce plastic waste is a step in the right direction for Thailand. But while Thailand may be able to talk the talk on the global stage, the country must implement strategies to strictly enforce the international agreements on the ground for positive results to materialise. Thailand will need to up their waste management game and prevent illegal fly tipping which contributes significantly to levels of plastic waste in both land and marine environments.

HolyCowCm
This is one of the good things the goverment needs to really work on. Everyone needs to do their part on the war against plastics in the sea and oceans.
Fridge
A good thing, from 6th to 10th on 175 countries... Just do the math.