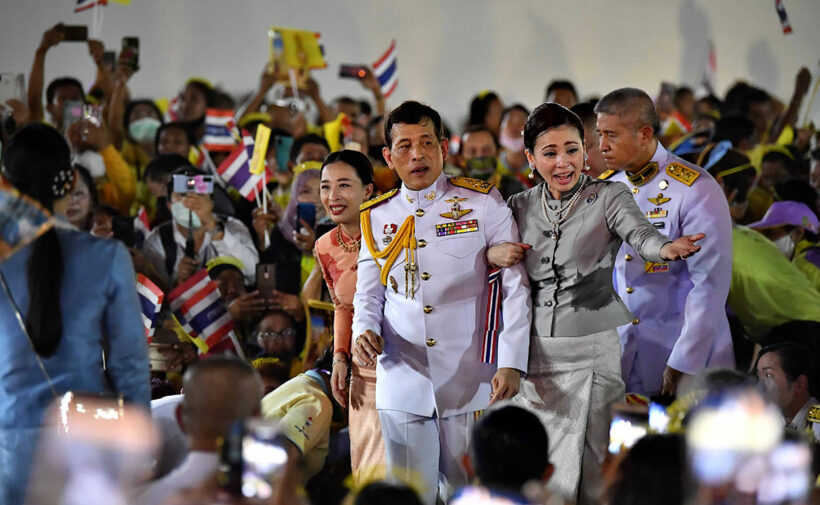 PHOTO: Their Majesties the King and Queen greet well-wishers in front of the Grand Palace in Bangkok after presiding over a ceremony to change the Emerald Buddha statue’s winter costume at the Temple of the Emerald Buddha on November 1,

The Bundestag, Germany’s federal parliament, has announced that Thailand’s King Maha Vajiralongkorn could be expelled from Germany if he continues to conduct national business whilst staying in his Bavarian villa, a popular overseas stay for the Thai monarch. HM the King’s long stays in Europe have come under scrutiny and criticism during the current spate of pro-democracy protests.

The German Parliament says that Thailand’s King Maha Vajiralongkorn enjoys diplomatic immunity during his extended stays in his Bavarian hotel, but that the state does have the power to expel him from the country.

The FM has previously warned the Thai King against ruling his country from Germany. He spoke out in the German parliament in October.

“We have made clear that the policies that affect the country Thailand are not to be carried out from German soil.”

The Thai King spends months at a time in a villa by Lake Starnberg, just south of Munich, and in spring he frequently stays in a luxury hotel in the ski resort of Garmisch-Partenkirchen.

Deutche Welle reports that HM the King returned to Thailand during October to attend a number of ceremonies and audiences, but Germany’s Left Party is calling on the German government to ban the monarch from re-entering Germany. Left party parliamentarians Sevim Dagdelen and Heike Hänsel claimed the Thai monarch was “conspiring with the military junta”.

“… should not be rewarded with a visa for luxury extended stays in Germany,”

Earlier this month the German Foreign Ministry claimed it had found “no evidence” that HM the King was issuing decrees from Bavaria. Opposition politicians in Germany said they found this situation “unlikely”, considering the length of the HMss stays in the German state.

Margarete Brause of the German Green Party says in a statement… “The question of what the government was doing to counter such unlawful actions remains unanswered.”

On November 1, during a public audience following a ceremony, HM King Vajiralongkorn described Thailand as “the land of compromise” as thousands of people chanted “Long live the King” in front of the Royal Grand Palace. He was responding to a question posed from the crowd by a British Channel 4 journalist.