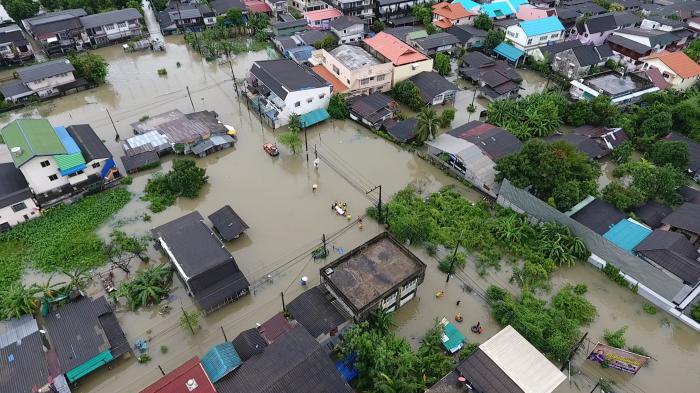 PHUKET: Eleven people drowned, two others were injured and two people are missing due to flooding in southern Thailand over the past four days, Mr Chatchai Promlert, director-general of the Disaster Prevention and Mitigation Department said yesterday.

He said the floods affected 157,580 families in 68 districts in the 10 southern provinces of Chumphon, Surat Thani, Nakhon Si Thammarat, Krabi, Trang, Phatthalung, Songkhla, Yala, Pattani, and Narathiwat. Phuket has not been directly affected.

Meanwhile, Government Spokesman Lt-General Sansern Kaewkamnerd said Prime Minister Prayut
Chan-o-cha was closely monitoring the flooding situation in the South and the prime minister had ordered local government agencies to coordinate efforts to help flood victims as much as possible.

In Surat Thani, Governor Uaychai Innak said the floods had affected 18,117 families in 421 villages in 14 districts.

In Nayong, a mudslide blocked a main village road, prompting officials to use a bulldozer to clear it.

Troops from Phraya Rassadanupradit Fort yesterday handed out bags of food and other necessities to villagers in Moo 4 village in Tambon Lamphura, Huay Yot. Villagers had to wade through chest-high water to receive the help.