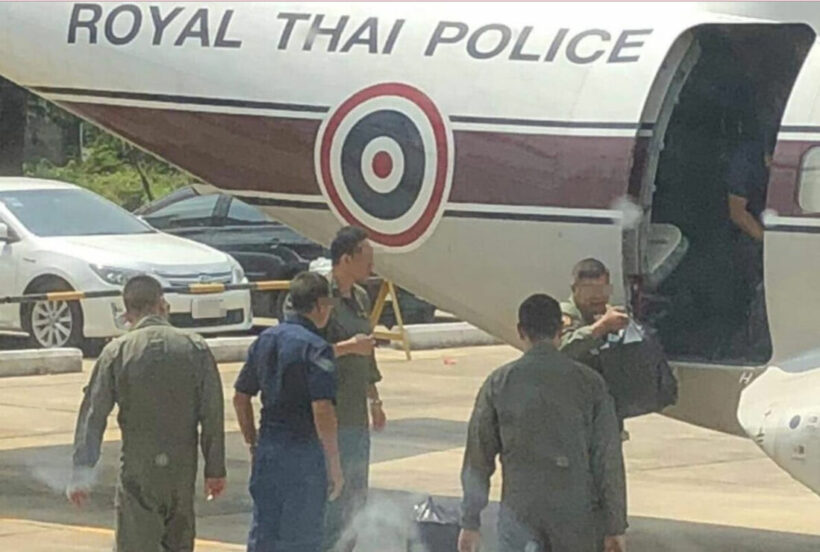 The deputy inspector on a case that is investigating police officers involved in smuggling illegal bootleg alcohol into Bangkok is remaining curtly tight-lipped regarding the case. When asked about the recent investigation, he refused to comment, telling reporters they should ask the main inspector directly. He said the inspector could provide more information and commentary and making remarks to the press was not his responsibility.

The corruption case involved 2 senior police officers that are accused of using an official police plane to transport illegally manufactured alcohol from Hat Yai in the south of Thailand north to Bangkok for distribution. The smuggling charges stem from a 2018 incident and have been under investigation by the National Anti-Corruption Commission for several years.

In March 2018, 2 planes from Royal Thai Police were allegedly seen smuggling liquor from the Hat Yai International Airport in Songkhla to the Thai Aviation Division in Bangkok. The 20 cases of liquor were covered with black plastic bags that were transported onto a truck while 2 police officers allegedly watched over the operation.

ASEAN now says the operation went on for 2 years because the investigation was hindered because the officers accused of smuggling continually rose through the police ranks.

Police corruption has long plagued Thailand and often complained about, but recent cases have brought it to the spotlight, especial the public outcry over the disgraced police officer, accused of murdering a suspect in custody, Jo Ferrari when his incredible wealth on a 43,000 baht salary was widely publicised.

Griff1315
Just a thought but why do the Thai Royal Police have their own airplanes. Is it the same as Tanks ordered for the Thai Navy.

ThailandRyan
2 hours ago, Thaiger said: The deputy inspector on a case that is investigating police officers involved in smuggling illegal bootleg alcohol into Bangkok is remaining curtly tight-lipped regarding the case Is that so he doesn't spill a drop of…
javada88
The cases were covered with black plastic bags. This kind of bags is also used when they interrogate people they suspect to be drug dealers. Multi purpose bags. Alan8505
👮🏽‍♂️Move along, nothing to see here!  🥃🥃🥃
Stardust
On 9/16/2021 at 8:21 AM, Jouni said: Well, naturally the business is full time, so it is necessary to have planes always ready to run the business. Just like Pablo Emilio has his own planes. Simply business minded people! Royal…

Phuket construction worker drowns after getting stuck under storm drain