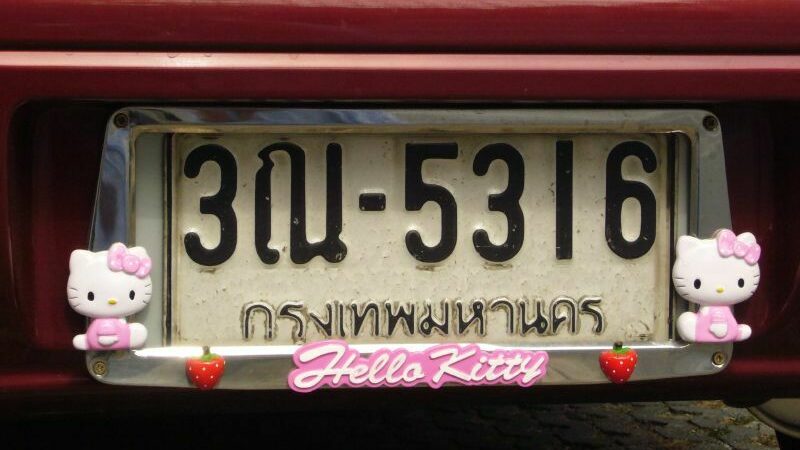 A man has allegedly been extorting people in the central Thai province of Samut Prakan to get their car registration plates back. The alleged criminal entrepreneur was exposed when a young woman posted on Facebook to say that a man had forced her boyfriend to hand over 100 baht to get his plate back after it came loose in floodwaters.

The Facebook poster, 21 year old Montharat Chalermwong, says her boyfriend arrived at work only to realise his registration plate was free from his vehicle. The boyfriend assumed that the plate must have been worked loose by the deep flooding in the area. He went back to where he parked his vehicle but was unable to find the plate. He did find a man, identified as “lung” or Uncle Chartree, who had located the plate. The man then requested 100 baht to return the plate.

When reporters got to the scene, they found Chartree at his house. They say they beheld a large number of car plates, perhaps hundreds, that the 56 year old man had collected. The man denied that he ever asked for money to return the plates and that it was up to the vehicle’s owners if they wanted to pay him a finder’s fee. The reporters talked to people who were at the man’s house to get their plates. The plate collectors say it was a fair service and paying 100 baht to get them back wasn’t a problem.

The residents still fared better than people in Saraburi who had taken their cars into an auto repair show only to have the owner, allegedly pawn the cars instead of fixing them.

DoUKnowWhoIAm
This one is BINGO!

Booster for those with 2 Sinovac vaccines coming by October