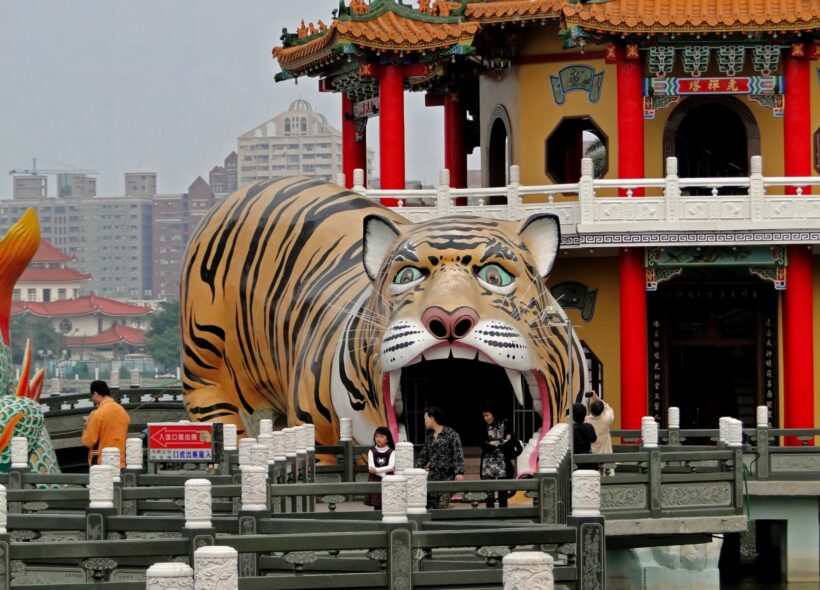 The Lunar New Year, like its solar counterpart on January 1, is a special time for people to let go of the past and embrace a new and brighter future. The date of Chun Jie (Spring Festival) changes from year to year depending on the Chinese lunar calendar, which determines when the 15-day festival will happen between January 21 and February 20. This year, celebrations begin on February 1, ringing in the Year of the Tiger — or ‘Thaiger’ for all you fans out there — and kicking off 2 weeks of festivities. It ends with the Lantern Festival on the 15th day of the first lunar month, during the full moon.

Unfortunately for those in Bangkok, authorities have again canceled the popular festivities on Yaowarat Road (i.e. China Town) because of the pandemic. So there will be no fireworks or parade this year. But you’re still likely to hear locals cracking fireworks at the break of dawn and there are plenty of lantern displays to see in and around the city. Or you can visit the nearest shopping mall for colorful displays of Chinese lanterns and decorations to capture the Spring Festival spirit and snap an auspicious pic for IG.

Also known as Chinese New Year, or CNY for short, it’s celebrated all over the world, including Thailand with its large population of Chinese immigrants and diaspora. The tiger is the third of the Chinese Zodiac’s 12 astrology signs, and like every other year, the Year of the Tiger occurring once every 12 years. The Lunar New Year celebrates the change from one zodiac sign to the next, with last year’s sign being an ox.

During the festival, Chinese families will visit their neighbors to wish them blessing for the new year and give gifts of traditional Chinese delicacies, such as jiaozi (dumplings) and tang yuan (glutinous rice balls filled with black sesame paste), which represent tuan yuan or family gathering and completeness. It’s common to be greeted with phrases like, “Xin nian kuai le!” (Happy New Year!) and, “Xin nian ping an!” (Have a peaceful New Year!). If you’re a young married couple without children, you’re likely to hear, “Zao sheng gui zi!” (May you have a son soon!).

So what are the benefits of being born in a tiger year? Tigers types are regarded to have strong personalities. They’re good leaders, risk takers and crave attention. They’re also known for their high self-esteem, and are independent and brave. Just like, you guessed it, a tiger.

“The tiger is a ferocious animal and is referred to as baishou zhi wang … or ‘the king of one hundred beasts,’” writes Xiaohuan Zhao, associate professor at The University of Sydney, in an insightful blog post about the Year of the Tiger.

According to legend, the tiger replaced the lion in the Chinese zodiac after winning a series of heavenly battles that earned its unique facial stripes — three horizontal stripes connected with one vertical stripe that reads as the character “wang” or king on its forehead. But perhaps the lion has had the last roar. Although you won’t find him celebrated in the zodiac rotation once every 12 years, you can still see plenty of lions during annual Lion Dance performances, especially this year as Chinese all over the world celebrate its striped cousin from the forest. Practically speaking, the tiger is native to China while the lion is not, which is likely the real reason for its spot on the zodiac.

Of course, you’re likely to see a lot of red during this time, such as red lanterns, red shirts, red dresses — even red socks and underwear. The colour red is seen as good fortune in Chinese culture and is believed to fight off bad luck and evil spirits. Family feasts and gatherings will be brimming with red, from red apparel to red decorations to red food, and many families will paste red paper chunlian or spring couplets on their doors to attract blessings and good fortune.

Traditionally, older family members will give hongbao or red envelopes with money to children as gifts. The amounts are expected to be quite high, depending on age and status, and are a good way for elders to invest in the younger generation, who relish the chance to top up their piggy banks and save money for a the future.

Praying to deceased family members is another popular tradition that plays an important role in ancestor worship among Chinese diaspora in Thailand. Some extra superstitious people even burn paper ‘money’ to send their loved ones in the afterlife (thought we’re not sure why departed souls would need fake cash).

The colours blue and green, along with auspicious numbers 1, 3 and 8, are also believed by some to bring give you much needed success and luck in the Year of the Tiger. Meanwhile, it’s advised to stay away from the number 4 and the colour white, which are both synonymous with death. But not every Chinese abides by such superstitions.

Make sure to check your nearest China Town for any lion dances, parades, inflatable “lantern” sculptures and firework displays. If nearby public festivities are cancelled again this year due to the pandemic, don’t fret; you can still partake in the best tradition of all — eating delicious Chinese jiaozi and tang yuan!

SOURCES: The University of Sydney | ELLE | The Thaiger

Lyp14 [ctxa]
6 minutes ago, Guevara said: I'm not holding my breath,i t WILL happen. It will be like Hell Fire Passage only much worse and by stealth. Cha-ochais so far up Xi's arse, he can barely breathe. Yes we should all…
DWiener
14 hours ago, Guevara said: There I was thinking it was the year of the Wuhan Bat. Thank you Xi and your flunkies for screwing up the planet. China used to be the sick man of Asia, the sooner it…