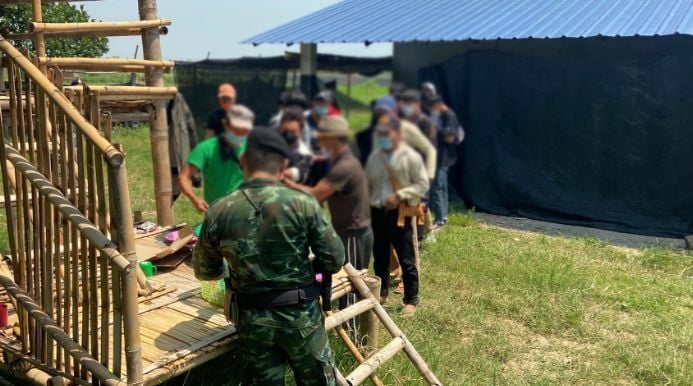 Police raided a house in the northern province of Chiang Rai yesterday to find 71 Burmese migrants hiding inside. A Thai man who was also inside the house told police he was hired to pick up the migrants who had illegally crossed over the border from Myanmar and transport them to the house. The migrants told police they were heading to Bangkok to find work. Unrest in Myanmar is ongoing since the military coup that took power in the country last year and Burmese people continue to illegally cross over into Thailand to flee the situation.

Inside the house in Mae Sai district were 24 men, 36 women and 11 children all from Myanmar. A 29 year old Thai man was inside the house and told police he was hired as a driver to pick up Burmese migrants from the roadside in Piyaphon village, on the Thai side of the border, and drive them to the house in Mae Sai district. Each time he made the journey he was paid 2000-3000 baht. The man said he knew of another van that brought the migrants across the border from Myanmar.

The tenant renting the property is a 30 year old man from Shan state in Myanmar who has been accused of illegally bringing migrants over the border many times before. Police are coordinating with local agencies to catch all the people behind the operation.

Since a military coup took power in Myanmar in February last year, a civil war has broken out in the country between the military and the Campaign for Civil Disobedience (CDM), a group formed by opposition activists. The CDM has organised mass protests against the coup. The military have responded with ruthless violence against civilian militia and air strikes on civilians. The Assistance Association for Political Prisoners (AAPP) says 1,503 Burmese people have been killed since the military regime came into power last year.

Violence is nothing new in Myanmar. Rohingya Muslims have suffered discriminatory policies in Myanmar (previously Burma) since the 1970s. Violence against the ethnic group was renewed in 2017 when Myanmar’s security forces raped and murdered Rohingya Muslims and set their villages on fire, causing an exodus of Rohingya Muslims to flee into Bangladesh and Thailand. The United Nations called the situation a genocide.

Political turmoil in Myanmar has forced many Burmese people into poverty. Jobs in Myanmar have dried up since the coup hit, compelling many Burmese to take arduous journeys through the jungle or in cramped vans to try and cross over into Thailand. Despite the risk of arrest and deportation by Thai police, illegally entering Thailand is the only economic lifeline available for many Burmese refugees.

For undocumented migrants in Thailand, life under the radar is hard due to overcrowded housing, fear of authorities and low wages. Burmese migrants often find themselves working low paid factory jobs or agricultural jobs out in the hot sun. But many have no other choice but to enter Thailand illegally because without proper documentation, no legal route into the country is available to them.

“The Thai government considers most to be economic migrants, rather than political refugees, and requires them to obtain registration cards to stay legally. In practice, only a small number can afford the registration fees or produce the necessary documentation, so their lives are a constant battle to avoid government detection… many live and work illegally and have no access to education, healthcare or basic services”, wrote the New Humanitarian.

The Thai government has historically allowed refugees from Myanmar to stay in nine camps along the border between the two countries. However, getting recognised as an asylum seeker is notably difficult, so illegally crossing into Thailand is the preferred option for many Burmese escaping their home country. The camps are a temporary solution to escaping violence and many asylum seekers escape the camps to look for work. In December 2021 and January 2022, the Thai government confirmed that 9,735 individuals from Myanmar had fled the upsurge in violence in Kayin and Kayah states and crossed over the border into Tak and Mae Hong Son provinces.

The International Labour Organisation estimates that 1.8 million registered and non-registered migrants live in Thailand, with the UN Refugee Agency reporting another 123,000 recognised refugees living in the nine camps along the border.