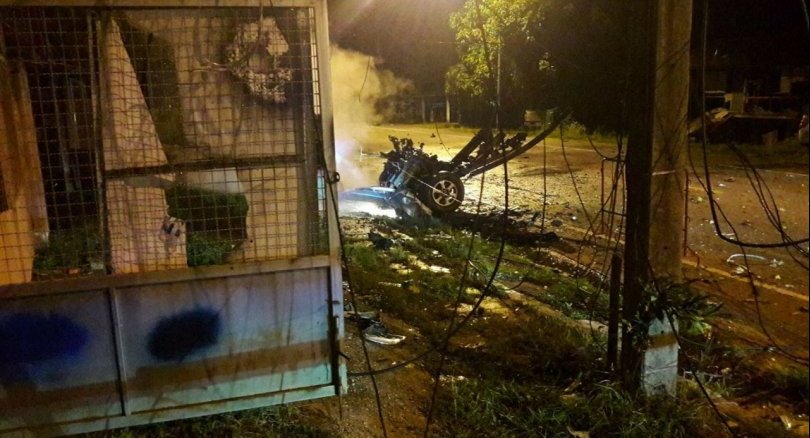 Muslim insurgents are suspected in the detonation of a car bomb in front of a row of townhouses, the official living quarters of staff at Pattani’s Mayo Police Station.

No one was killed or injured in this morning’s bomb attack. Luckily police spotted the vehicle while it was being parked around 4am. The official barracks for the local police are just 10 metres from the police station. The explosion partially damaged the housing buildings.

Officers on duty told the pickup truck driver to move the vehicle away while he was parking it in front of the townhouses behind the police station. But the driver abandoned the vehicle and fled before pick-up exploded.

The pick-up was among six pick-ups robbed from the Wangto Car Centre in Songkhla’s Nathawee district yesterday. Two are dead after the daring robbery which has set off a dramatic series of events, including a hostage-taking, shootout, explosion and the safe disposal of a bomb.

Police say four of the six pick-ups have been found. One was used to launch the attack in Mayo district on Thursday morning. Police are still looking for the other stolen pickup.

Police arrest two men with a kilo of meth-amphetamine