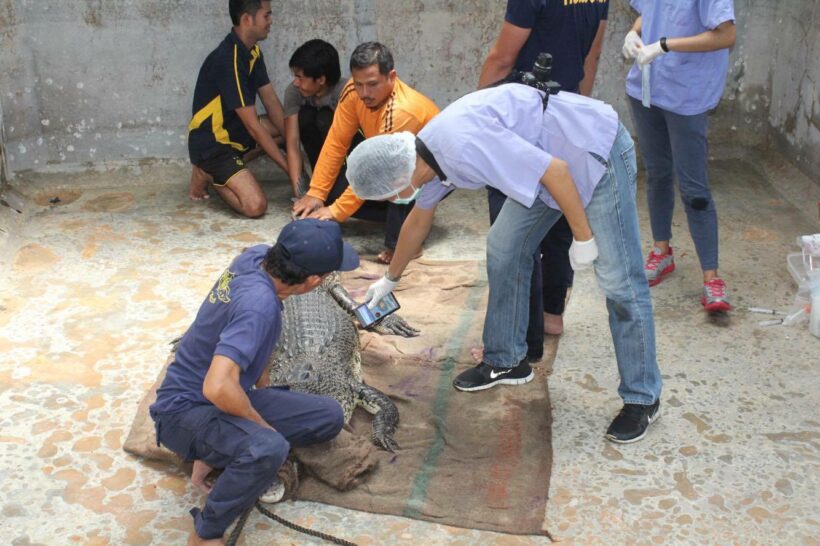 A big team from Bangkok consisting the Deputy Director of Department of National Parks, Wildlife and Plant Conservation (DNP) – Dr. Pinsak Surasawadee, alongside Marine Specialist and Deputy Dean of Faculty of Fisheries, Kasetsart University – Thon Thamrongnawasawad, and other specialists visited the 200 kilogram crocodile today (September 8) to verify the exact species in order to find a proper home for it.

Currently, the team assumes that the crocodile is probably a saltwater or a mix species between freshwater and saltwater.

Vets from Mahidol University checked for a microchip but didn’t find any so they attached a new one on the left of its tail. The exact length of the reptile is 2.87 meters long.

“The veterinary team took all the physical samples such as blood, membrane and faeces to verify its DNA. The crocodile also had a veterinarian checkup for disease and appears to be a healthy male crocodile. The DNA test will take about 1-2 weeks,” said the Deputy Director of DNP.

Following the DNA test, the crocodile will be released to a proper home which will depend on the results and where it is also safe for people.

“If it is a saltwater crocodile, it will be released back to the sea and we will make a study on where in the Andaman Sea would be the best for it. It should be an area where crocodiles live in before and we will need to make an agreement with the locals first,” he said.

Meanwhile, Dr. Thon suggests that if the crocodile happens to be a mixed species, it should be provided a huge pond to live in.

“If it is a mixed species crocodile, we should provide a 5-10 rai pond to give it the most natural environment to live in. The location can be suggested by local authorities. A detector will be attached to follow where it goes,” he explained.

“However, there are many abandoned and quiet spaces in national parks in the Andaman sea area if the crocodile is from  salt water.”

He added that the Fisheries Department will soon provide a bigger rehabilitation pond for Laypang.

Regarding its reluctance to eat, the officer explained that it is normal because crocodiles usually eat once or twice a week depending on the amount of food they eat each time. Some of them can even live for a month after consuming a huge amount of food. However, the officers will start feeding it with living fish from today on as it’s most probably more aligned with its natural diet. 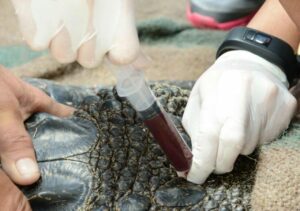 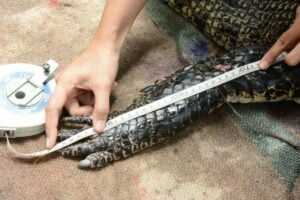 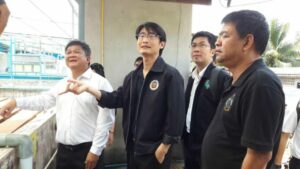