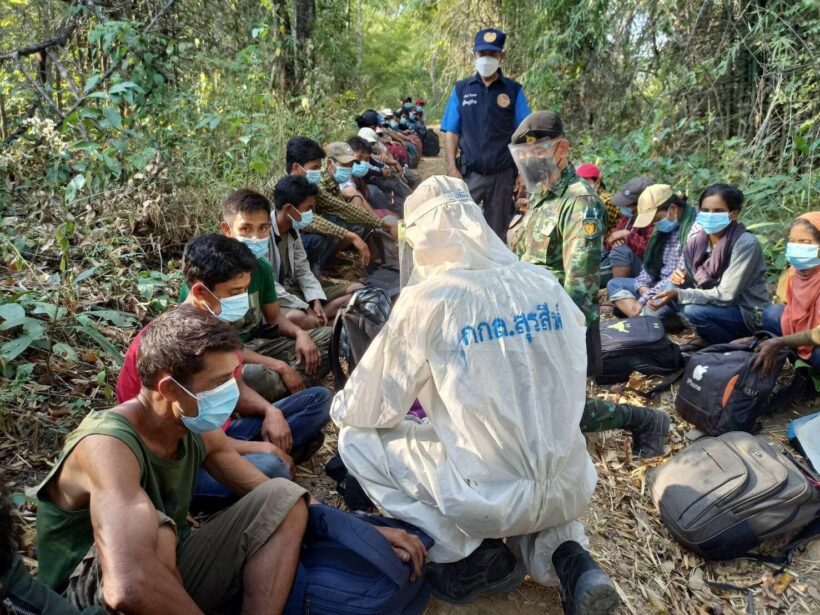 Thai soldiers and police have arrested 246 Burmese migrants in 6 border areas across 4 districts of Kanchanaburi, a Western province, yesterday and today. The migrants say they paid job brokers between 15,000 and 25,000 baht to get them jobs in several Thai provinces.

Thai authorities also caught 4 guides helping the migrants, and charged them with assisting illegal border crossers. Out of the 246 migrants caught, 156 were men, and 108 were women.

A representative of a migrant labour development network estimates that Thai authorities caught 80,000 illegal border crossers last year, most of them Burmese. He also estimates that as many as 100,000 probably got passed authorities, and are now working in Thailand’s major provinces.

It’s common for authorities to arrest big groups of migrants in operations like this all over Thailand. Last month, soldiers caught 31 Burmese migrants on the Thailand-Malaysia border.

Thai PM Prayut said last week that “all parties involved” should work to register workers from neighbouring countries so that they can be employed legally in Thailand, as the country is suffering a labour shortage.

Soidog
Makes you wonder for everyone they apprehend, how many slip by?

DoUKnowWhoIAm
17 hours ago, Thaiger said: as the country is suffering a labour shortage. So many highly skilled foreigners would like to work here, but it's a to damn complicated process ! But on second thought, they might only want low…
Jason
The real criminals are the lowlifes who profiteer from people smuggling. There's no money back guarantee. This capture should be widely publicised so that people think twice before handing over their money on a futile exercise. Couldn't the Thai Government…
Manu
16 hours ago, Soidog said: Makes you wonder for everyone they apprehend, how many slip by? A LOT of them, same with drugs smuggled into Thailand, for a tonne seized, 1000 of them go through. Apart from being humanly impossible…