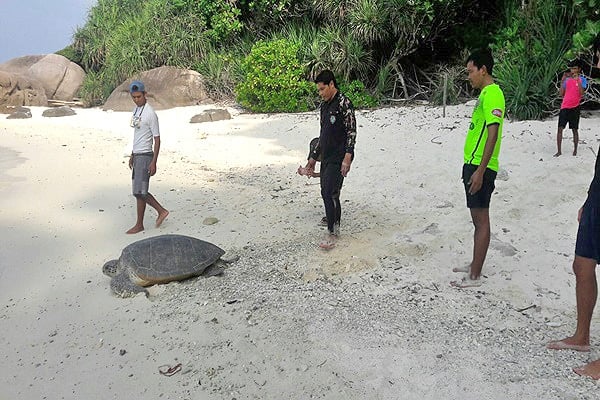 Mu Ko Similan National Park officers rescued a mother green sea turtle who laid eggs earlier on Nui Beach but was too exhausted to walk back to the sea.

The Chief of Mu Ko similan National Park, Ruamsin Manajongprasert, said that the national park officers of Miang Island received a report from a tour guide that some tourists found a big turtle on Nui Beach. The turtle is about 1 metre long with dark colouring. She was found under a tree on the beach exhausted and the officers believe that she might have come to the beach around March 11 to lay eggs. She appears too exhausted to walk back into the water.

The officers have helped move the mother turtle back to the sea. The place where they believe that the turtle has laid her eggs has already been cordoned off with ropes to let the eggs hatch by themselves. The officers mentioned that the eggs have been laid for a while already so moving the eggs could cause danger to the natural hatching process.

“The area where the eggs are laid is safe enough to let them hatch naturally. There will be officers stationed nearby the area to ensure safety. This is the second green sea turtle laying eggs on Miang Island of Similan Islands this year. Earlier, about 10 days ago, there was another one that laid 108 eggs but we still can’t identify the type of turtle so will have to wait for the hatchlings. Those 108 eggs have been moved to the nursing pond already. I’m very glad.

“There has been no turtles laying eggs on Miang Island for a long time,” said the Chief of Mu Ko similan National Park. 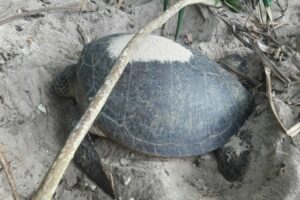 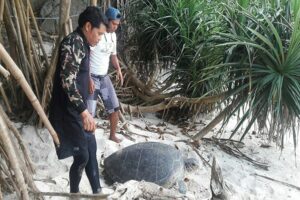