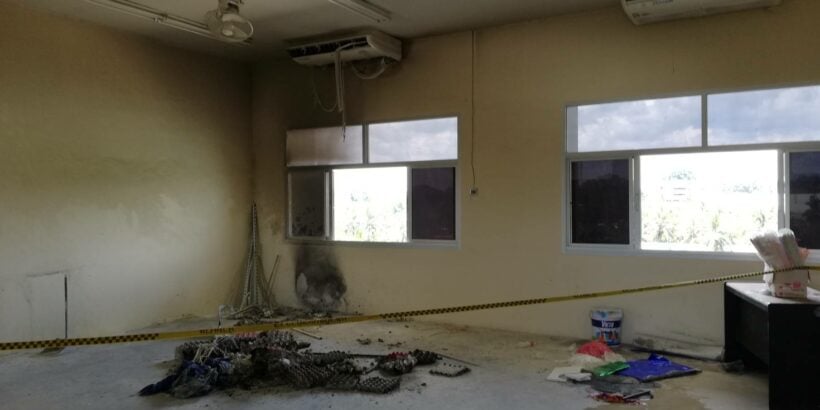 Fire fighters and fire trucks arrived at a class room on the third floor at a school in Krabi yesterday (May 15). Teachers and students were trying to put out the fire with fire extinguishers and buckets of water.

Krabi Police were notified of the fire at the Krabi Provincial Administartive Organisation (OrBorJor) School in Krabi City at 1pm .

It took about 15 minutes to control the fire once the fire fighters arrived.

One of the teachers says, “While I was walking on the third floor, students ran to me and told me that their classroom was on fire. I was rush to the classroom and saw one metre high flames.  I used the fire extinguishers to put out the fire but it was already too large. The classroom has not been used yet. The room had been used as a store room.”

It is believed that the fire first started in a pile of egg trays and pieces of cloth. The fire then spread to an air conditioning unit.

Forensic police are continuing to investigate the incident.

Facebook transparency report released. Which country filed the most requests?

Woman talked down from pedestrian bridge in Thalang